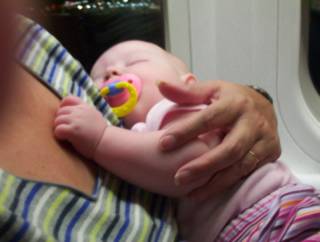 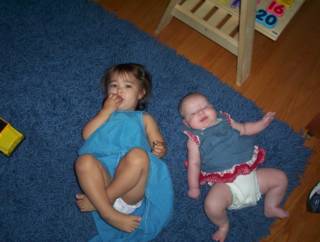 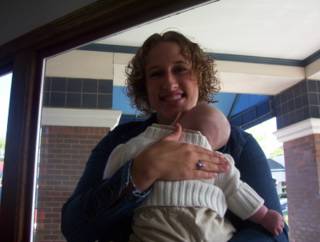 Christina able to get Maddie to sleep anywhere 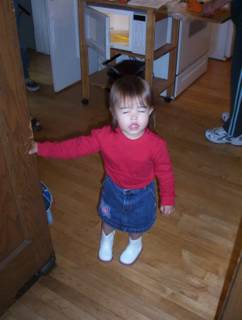 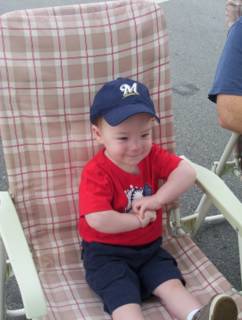 Ben waiting for the baseball game 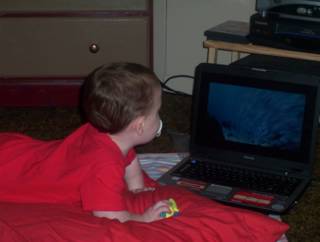 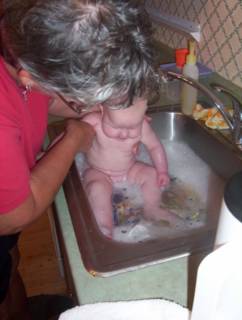 Baths at grandmas house are in the sink, good thing she won't remember

Isn't it suppose to cool off in the fall?

Being in Wisconsin made me realize that I like seasons. I like the fact that you get to wear long pants and long sleeves and not be sweating and roasting. I left Milwaukee on Tuesday morning and when I drove by the clocktower it said that it was 54 degrees, when we landed in Houston it was a humid 95. I just don't get it, it is almost October and it seems like it is still August. It just doesn't seem to make sense. This weekend is the first home football game and there is something about watching football in shorts and a t-shirt that just doesn't make sense. I am hoping that is starts to cool off, I would be happy with somewhere around 80.

Well I left you on Thursday and we still had a few more days of our trip. Friday was spent in Germantown with the Janetzke clan. We went to lunch for Grandpa's birthday and Christina came with us too. We then just hung out at the house and talked and got to visit with ones we don't see often. Saturday was some more volleyball at Martin Luther watching Alex play. Maybe it was because it was so early in the morning, but they didn't do as well as they did on Tuesday when I saw them. Cousin Ben, Aunt Amy, and Uncle Joel met us at ML and then we happened to run into Cousin Kate, Uncle Alan, and Aunt Tracie at Kopps on the way home. Once home, Kate wanted to play while Ben and Maddie slept, so we took Kate to the mall to distract her and let the others sleep. It was also Aunt Jana's birthday, so we went to the nail salon and had a pedicure, that felt good. Then they went out and I went home to relieve grandpa of babysitting duty. Sunday was our first trip to Miller Park. We watched a good game, but the Brewers lost. We almost got poured on, but made it into the stadium with just a few seconds to spare. Then Monday was an exciting day with Ben, Amy, and Joel. We took Ben to Chuck E Cheese to let him run around. We wanted to go to the Zoo, but the weather wasn't helping us out. He loved playing the games, especially skeeball and the ducky game. It was a fun time and then we all went to dinner that night before they headed back to IL. We were suppose to be back here on Monday night, but we changed our flight and headed out early Tuesday morning. We then just hung out yesterday at home and today it was back into the swing of things with school and athletic period. This weekend is homecoming, but more importantly, it is the Michigan/Michigan State game, so I'm sure we will be watching that somewhere.

We are surving the heat, but hoping it breaks soon. I'm getting excited for basketball which starts on the 17th. Then life will be even more hectic than it already is. We can't wait to be back in Wisconsin and that time it will be for a little bit longer time.

Well let's just say that I never thought that I would have to think about a hurricane coming towards where I live. At the beginning of the week I was wishing that I was there to get everything ready, but as the week has gone on I have realized that I am glad that Maddie and I are there. I am still not thrilled that Chad is still there, but he is at this moment on his way to his aunt and uncle's in Dallas. Chad is a lot more at ease I think that we are here and safe and not having to deal with everything. He was great and got everything ready and packed everything I asked him to.

Back to our Wisconsin trip:
We have been doing lots of visiting with family and friends. We took a trip to Chicago on Tuesday to see Alan, Tracie, and Kate. We got to watch Alex (my cousin) play volleyball and eat dinner with Amy and Ben. We have been in the car a lot, but Maddie doesn't mind since she usually naps in the car. We got to each lunch with Jana yesterday and today we might just hang out at home. I try to keep myself busy, so I don't have to think about all this Rita stuff. Tomorrow is Grandpa J's birthday and Aunt Kathy and Uncle Scott will be here the whole day, so we will be hanging out in Germantown for the day. We are looking forward to seeing everyone and getting a chance to catch up with them.

That is all for now. We are suppose to be heading back to Houston on Monday, but we could be delayed a few more days. We won't be going back if we don't have power or if there is severe damage. We are hoping to be able to get back sooner than later to be able to see Chad and to make sure everything is okay. 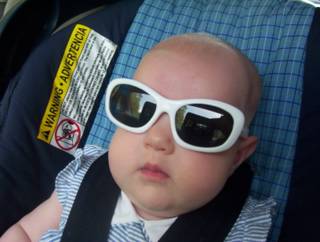 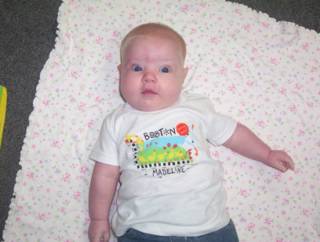 excited to be wearing my ducky shirt (thanks aunt Jana) 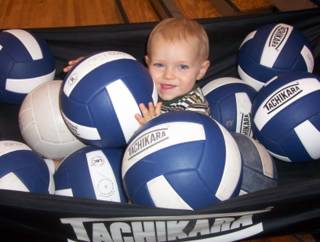 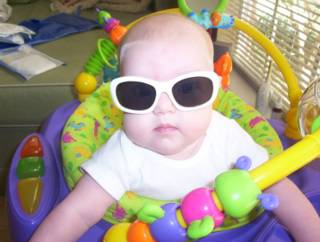 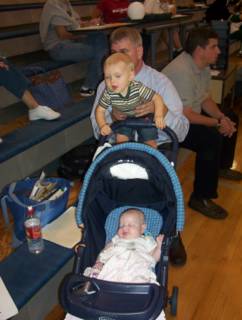 Maddie's "boyfriend" Isaac pushing her around

Until what some of you ask? Until Maddie gets to make her first trip to Wisconsin, that's what. I am really looking forward to our trip coming up. I am trying not to think about the plane ride and just hope that she doesn't scream the whole time. Grandma and grandpa Heff will be here on Thursday and then on Sunday Maddie and I fly home with them. I am at least thankful that I don't have to fly by myself for the first time with her.

The dust seems to be settling around here. At school we have about 20 new students with the possibility of a few more from the New Orleans area. We have a new teacher that was a teacher at New Orleans Lutheran and we are still always trying to find ways to help those families.

Chad had freshmen retreat last night, so it was just Maddie and I. We did pretty good, we took a short trip to Target for a duffle bag for our trip home. Then it was just hanging out and doing laundry. Yesterday morning Chad had to sing at Living Word (one of the association churches) and they were honoring a pastor who was celebrating his 60th anniversary of the ministry and it was actually Mr. Dobberful's (M.O. principal) cousin and a classmate of grandpa Bickel's. Chad went up to ask him about grandpa and then I asked about Mt. Olive. So that was a little out of the ordinary, but cool.

This week there isn't too much going on, volleyball and football are away, so we don't have too many afterschool activities to attend.

Maddie has started to roll over, so that is always exciting. She gets mad though when her arm is stuck underneath her. She loves to talk and has also started squealing when she wants to be noticed. Well I am looking forward to seeing many of you in the next couple of weeks. We are looking forward to visiting with everyone. We'll see you soon. 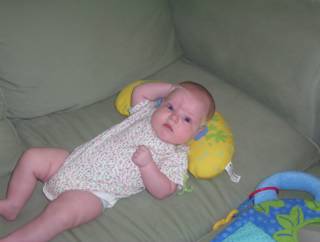 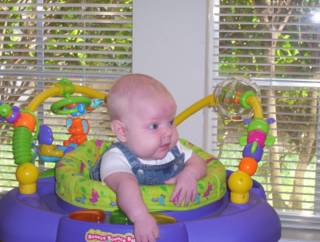 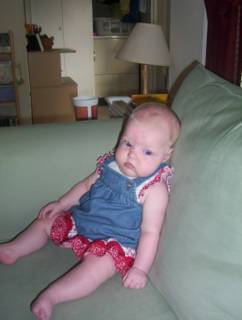 Our little cowpoke just waiting to saddle up 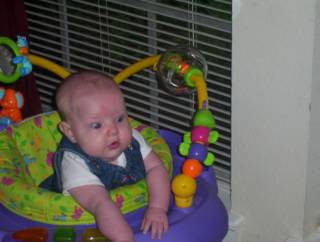 watching baseball (we think she likes the crowd noise)

A Night Out With The Girls

So I got a night free of Maddie, well for about 5 hours. Last night we went over to Paul and Christa's for dinner (shrimp boil- I had a hamburger). Then Christa and I left Maddie and Isaac with Paul and Chad and headed out to pick up Kim and we went to this place called Papa's which is pretty much an old metal barn that has been turned into a bar. We just sat and talked and made fun of the other people there, especially the dancers, one guy even asked Kim to dance. I got home about 12:30 and had a fun time. It was nice to be out of the house not running errands and out with friends. Chad had an okay night, Maddie gave him a little trouble, but nothing he couldn't handle.

Friday was suppose to be football at Northland, but we ended up not going. We had gone over to Kim and Andrew's to cookout and by the time we were done with dinner and talking it was already 8:15 and the game started at 7:30, so we decided not to go and play cards instead. So we have had a pretty eventful weekend and are just grilling out with Pete and Luke today and probably just hanging out tomorrow. Chad got to watch football yesterday, so he was happy. Maddie watched the Wisconsin game and hung out with dad.

On the hurricane side of things, it has been a long week with all the news coverage and just all the people pouring into Houston. At school we are allowing students to come for no tuition and it looks like we might get one of the teachers too. We are helping them with clothes and just everyday things. One of the families have already said that they are probably just going to stay here. New Orleans Lutheran probably won't be able to get back into the building until 2nd semester and even that is wishful hoping. We are all trying to figure out ways to help.

This week looks pretty uneventful, 4 days of school, a few volleyball games, Isaac's 1st birthday party and then Chad has Freshmen Retreat, so that means I am home with Maddie for two days straight. Hope everyone is doing well and that with school starting has gotten back into the groove of things.

Can't wait to see a lot of you in just about two weeks.