Just wanted to give a great big birthday wish to my mom, who is celebrating today. In our house that usually means it is just another day where you get to choose what is eaten for dinner. We wish we were there to help you celebrate. I hope you enjoyed Maddie's present for you. She worked real hard on it. We can't wait for your visit in October-I'm sure Maddie will have new things to show you. Have a great day- you even only have to work a half day today. Happy Birthday Grandma!! 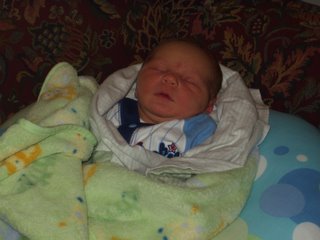 Here is that picture I promised. This is Luke Arthur. 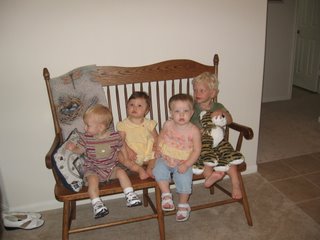 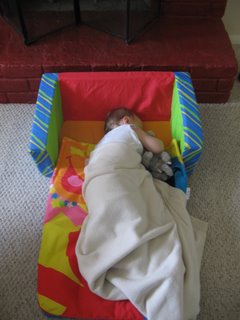 Maddie taking a nap on her couch 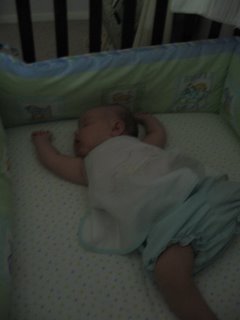 Emma taking a nap (do you see a trend here?) 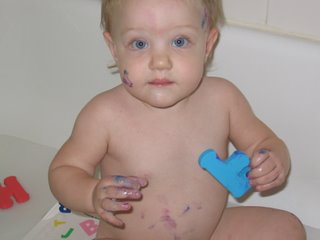 Well we have added one to our cousin list. Aunt Kathy and Uncle Scott finally had their baby after waiting an extra week. Luke Arthur was born on Saturday August 26th at 5:55am. He was 8lbs 10 oz and 21 1/2 inches long. That puts him in the same weight class as Emma. Scott had started school last week, but they are giving him three days to stay home with the new mom and baby. They got to go home from the hospital yesterday and are settled at home and hopefully enjoying their new addition.

We are hoping we get a chance to meet Luke when we are in Wisconsin in November, otherwise it might not be until Christmas.

When we get a picture of the little guy we will post one.

So congrats to the new family of three. 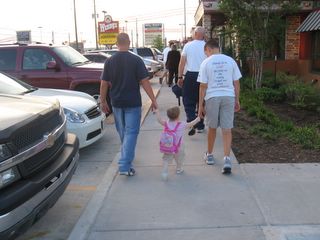 Maddie with "brothers" Michael and Christian 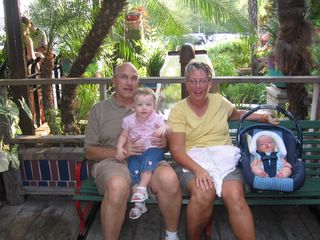 Grandma, Grandpa, and the girls 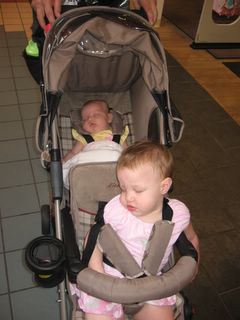 Katy Mills took the wind out of both of their sails 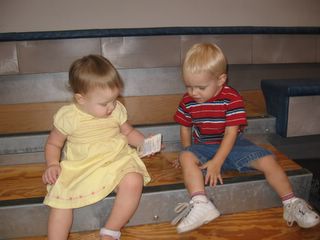 Maddie and her "boyfriend" Isaac 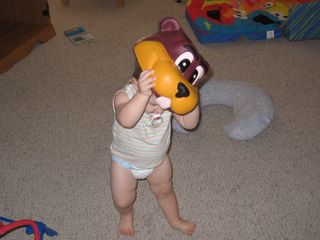 Maddie with the "stupid hat" on 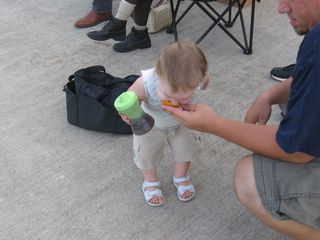 Diving into her orange at the Blue Knights game

That's right, it is back to reality for us. Grandma and Grandpa left on Tuesday, which means it is just the girls at home. We aren't sure when we will have visitors back here. Maybe in October- if Grandma feels so inclined to come for a weekend. We had a great visit with them. They got in late Friday night- only 2 hours late after some genius threw a plastic cup in the airplane toilet and made it overflow. Saturday brought a football scrimmage that we managed to get out to and then it never happened, since it was lightening outside. So we ended up going to lunch with the Wilkes and then coming home and watching the Brewers/Astros game. Sundayw as church and getting Chad off to Senior Retreat. Grandma, Grandpa, Maddie, Emma, and I headed out to dinner. We went to Pappasitto's Mexican Cantina (both Grandma and I were not impressed). Monday we decided to conquer Katy Mills (like Gurnee Mills) We got there about 10:15 and left at 3:30. Maddie managed to walk the whole thing and thensome. Maddie got some new clothes for fall and grandpa felt the need to make sure she had some new vans(shoes). (pink checked ones) We then headed back to pick up Chad who had a long night at the retreat. With just the normal things of having to stay up with 80 Seniors, he got thrown in the pool with his cell phone in his pocket. It was out of commission until yesterday when he got a new one. Tuesday we ventured for breakfast and then did some grocery shopping. Grandma and Grandpa left Tuesday late afternoon. We headed to school for the volleyball game and then home. Wednesday I think Chad just needed to still recover from the weekend. Thursday we went to dinner with the Sommermeyers and Straubs. Then went over to school to watch Christian's Blue Knight game (Blue Knights is the feeder football program at school). Yesterday was just a slow day at home and some relaxing in the evening. This weekend is not too much of anything. Today we have a birthday party to go to, but that looks like it is it. Next week is a short week for school, they have a half day on Friday. Some of the other ladies and wives from school are coming over on Friday for a night in, but free from kids. Then on Saturday we are going to head up to Dallas for the long weekend.

Maddie Update: She is still just as much as a monkey as before. She is getting taller everyday. She had a playdate with Isaac this week and they just had so much fun. They also got to play at the volleyball game and they were dancing like it was going out of style. She is great helper with Emma, she is starting to get the concept of being gentle and that Emma isn't a toy. She has also been going to sleep by herself the last few nights. We are hoping this continues.

Emma Update: She is growing everyday too. She looks a little more like Maddie, but not too much. She has been getting up on her side from her belly and so we will see how long it takes for her to roll herself to her back. She loves to watch Maddie run and be crazy. She has also been sleeping great. The last two nights she has slept from 11pm-7am.

We are already gearing up for our trip in November. We can't wait to see everyone. We are planning on driving for Christmas, so I have started to do some planning for that. Other than just getting back into a routine and going to school functions, things have been pretty quiet around here.

Welcome To The World Nora

This isn't the cousin we are still waiting for, but our friends Nathan and Katherine had little Nora Katherine join their family this past Saturday. I was a little surprised to see that posted on their blog since Katherine wasn't due until September 11th. 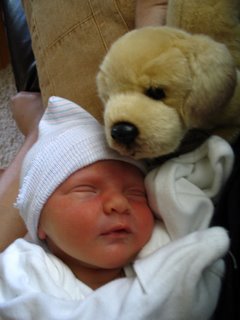 Nora was 5lbs 10oz and 19 inches long. We also then have to welcome Nathan and Katherine into the parents club. They are home now and doing great. So here she is.

We are still waiting on any word from Aunt Kathy and Uncle Scott on the arrival of their new one, I'm sure that once we hear the word, we will post it on here. 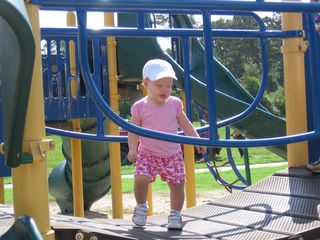 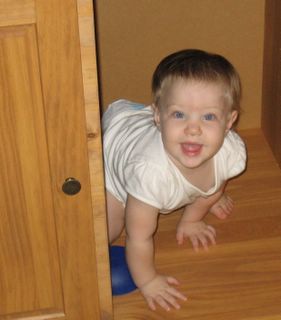 Her clubhouse, our entertainment center 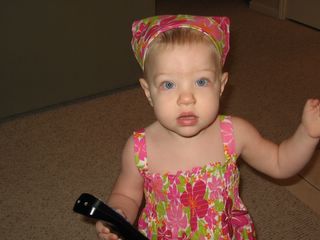 "Oh, I wasn't ready for the picture" 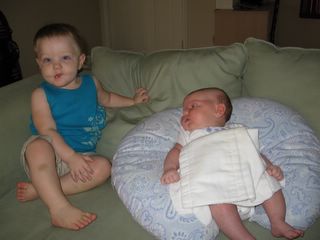 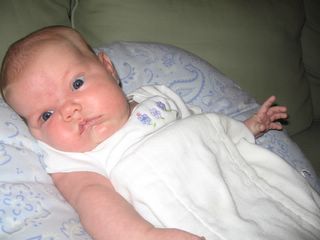 Here we are at 1month. More Maddie like everyday 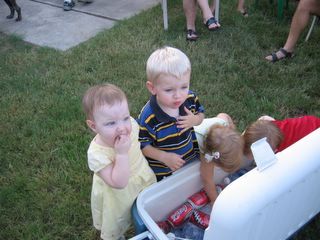 Sharing a handful of ice with Isaac 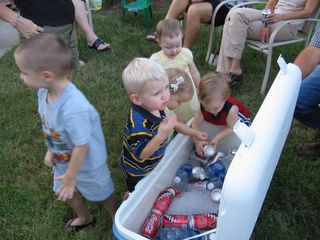 Just getting something cold to drink

Yes, that is right. After 14 long months of waiting Maddie is finally getting some teeth. She has her two bottom front teeth coming in. She sure is a trooper right now. She hasn't been too bad, but at certain times, you can tell they bother her more than others. We had to hold her down and push her tongue out of the way in order to even see them. Grandma Heff told her to work on two things while she was gone and one was teeth. Maddie must get her procrastination from her dad, because Grandma comes back this Friday and she is just getting them now. The other was saying Grandma, we are quite there yet.

Maddie is doing great with Emma. She always wants to be around and helping. Emma is her "gee". We have figured out that is just baby, but when you talk about Emma, it is "gee". She points out "gees" in books and also when we are at the store. We had been looking into getting Maddie into a gym class, but there aren't any in the evenings. Grandma Heff thinks she is her uncle Alan reincarnated. Because she is all over the place, climbing and being a daredevil. On Friday we had the faculty get together, there are about a dozen kids who are Kindergarten and younger and actually about 10 of them are 2 1/2 and under. So she was just in heaven. They all played well together and just loved all being around each other.

Chad starts school on Wednesday. I'm sure he would rather have about 3 more weeks of summer, but that is life. He has been going in on a consistent basis for about two weeks now, so he is sort of in the swing of things. Which also then gets us into school mode, with just the three of us at home.

I am doing well. I am surviving the two. The three of us will walk to the park by our house and Maddie gets to play in the sand and go down the slides and just climb everywhere. I am keeping busy with them, but also getting some scrapbooking in too. I have started some rubber stamping and have actually started on our Christmas cards. I know I am pathetic, but hey, it keeps me busy, when the two are asleep.