So one of my favorite new songs is "I Gotta Feeling" by the Black Eyed Peas. The line is "I gotta feeling, that tonight's gonna be a good night." I didn't have a feeling, but have you ever had a day that was just an ordinary day and then it ended up being one of the best nights ever?? So yesterday (Saturday) I woke up tired, Lilly decided that she wanted to see what kind of night life we had between the hours of 12:30am and 2:30am, she as disappointed because there was none. So as tired as I may have been, I got up and started my day. Lilly, Emma, and I went to Wal-Mart for some staples for the Michigan State/Wisconsin game. Chad and Maddie went to uncle Kurt's football game and brought him back here for the game, uncle Ben came over and also my cousin Jared. While those boys watched the game, Joel, Ben, Sam, Emma, Maddie, grandpa, and I checked out Harvest Fair at State Fair Park. It wasn't bad, it was much better last year, but the kids still had fun. 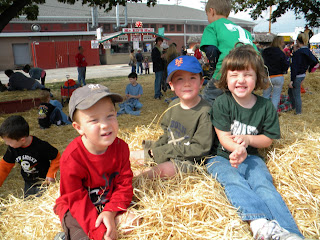 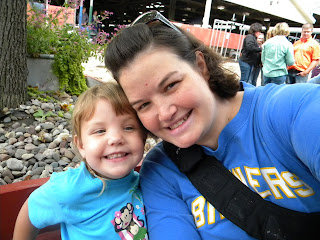 When we got home, Lilly woke up a little bit and so I decided to get her back to sleep and was going to take a little nap with her. This was a little before 4. Chad and I were going to the Brewers game to sit in the Diamond Box behind the Phillies dugout, so I figured I could get a half hour nap in. So my uncle Kip called to let us know that they were down there and if we wanted to stop by them in the parking lot before going in we could. So we decided to get ready and get going. We made it down there about 4:30pm. We had a couple beers with them and then headed into the game. Eric and Jacquie were at the game to, so after playing where's waldo in the crowd of 40,000 we found them and had fun texting back and forth. 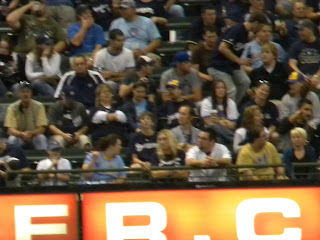 Can you see Eric and Jacquie??

After a two run walk-off by Braun we met everyone back at Kip and Susie's car. 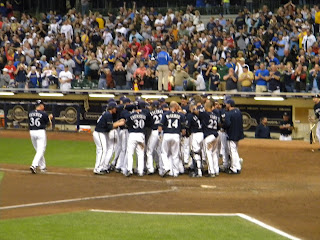 After hanging there for a little while, we decided that it would be fun to visit uncle Ben at the AMF where he bartends. Jacquie wanted to bowl, so after some deliberation we decided to bowl a game, it was the original Heffelfingers vs. the In-Laws. We had so much fun and just laughed. Even though there was probably some sore muscles this morning from bowling, I think everyone just had a great time and it was just one of those nights that just happened. I always think that those can sometimes be the best kind. We were even home by midnight and so I got a good night's sleep.

Here is our Bowling Team: 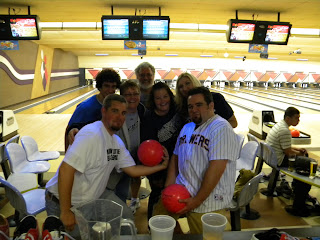 Missing: Two weeks of our lives

Here is the missing two weeks in pictures: 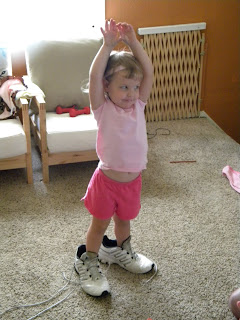 We like to exercise. Actually Emma has mixed two of her favorite pastimes, getting her energy out and also playing dress-up. Emma is loving school and I think school is a good fit for her. We miss having Mrs. Willer as a teacher, but we know that she is learning all sorts of wonderful things. 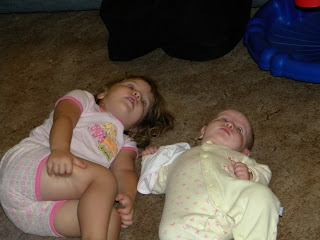 We spent the night at grandma and grandpa J's while they were in Michigan with Maddie and dad. We hung out with aunt Lydia and uncle Josh. It was fun, we went to dinner, we laughed a lot, and Lilly and Emma had a little bonding time. Maddie and dad went to Michigan the weekend after Labor Day to help great grandpa Bickel celebrate his 60 years in the ministry. They went with grandma, grandpa, and uncle Kurt. I think Maddie enjoyed having a little adventure of her own. 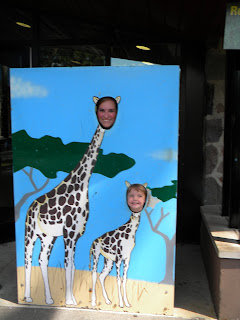 Since we were hanging out with aunt Lydia, we thought is would be fun to take her to the Zoo, so here is Emma and aunt Lydia posing as Emma's favorite animal. 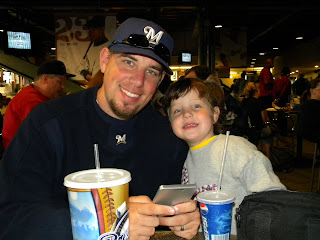 We took in a Brewers game with Maddie and Emma on a Friday night. Dad and Maddie played a little gameboy while we were finishing up our dinner. Emma's favorite part of the evening was that she chose the Polish to win the Sausage race and he won. She was telling everyone that she picked the right guy. Maddie was so excited to go to the game, she doesn't get that they are out of the race, but she loves them anyways and it is just great to see her get all excited about it. 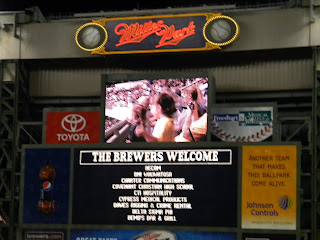 Of course we had our turn on the jumbotron, Maddie always says hi to the camera guy when we sit down and as soon as any music comes on, she is up and dancing. The Tuesday after this game I had MOPS and Mia's mom (Mia is in Maddie's class), told me that she saw us again up on the jumbotron (that is like the 3rd time she has seen us).

We are finally into a routine of school- usually Mon, Tues, and Wed are no problem with getting up, but once Thursday hits Maddie is wiped out. We have been keeping the weeks pretty low key, but the weekends always seem to be busy.

We have had two new babies born to some of our friends. Nick, Ashley, and big brother Eli welcomed Addie at the beginning of September. Ryan and Kate had their first baby Michaela last week. Just a couple more girls to add to the bunch.

Nolan also spent a week with us while Jana and Mike were in Hawaii. the girls loved chasing him as much as he loved chasing the girls. He did a great job with our carzy schedule and having to pick the girls up from school.

I know I have been slacking on my Lilly pictures, so I will try to get some of her this week.

So we took the long weekend to head over to Michigan to do some visiting, but also to go to Chad's cousin's wedding. Jenny and Alan got married on Saturday, but since the girls and Chad had off on Friday we decided to head over on Thursday. Maddie made the drive with grandma and grandpa J and aunt Lydia right after school on Thursday. Emma, Lilly, and I picked Chad up from school and then we were on our way. We made pretty good time and pulled into Dimondale (grandma and grandpa Bickel's) about 10:30 eastern standard time. Everyone was still up including Maddie and so after a little visiting, it was off to bed.

Friday we got to visit with grandma and grandpa, Maddie and dad did some fishing, I made a trip to Meijers and then we took off for Wolverine Lake to spend the evening with the Heidens. We got to meet Aaron for the first time and the kids just had a great time playing together. Saturday morning Sarah was so nice to cut my hair and then we were off to Sterling Heights for the wedding. We all had fun and ended up dancing the night away.

Sunday we were back to Dimondale to celebrate Luke's 3rd Birthday. We had pizza, cake, presents, more fishing, whiffle ball, and again lots of laughs. We were planning on heading home on Sunday, but we were tired and the girls were having lots of fun, so we spent one more night. We got some cards in then it was off to bed.

Monday we got going and made a stop at Grand Mere State Park. Uncle Ben and aunt Christina came with us. We hiked the trail, went up and down some sand dunes and then played in Lake Michigan. We made it home in good time and it was nice to be back home, sleeping in my own bed. We have been back in the school swing and this weekend Maddie and Chad are heading back to Michigan with grandma and grandpa J. Nolan is coming on Friday and staying with us all next week while aunt Jana and uncle Mike go to Hawaii.

There are lots of pictures from the weekend, so enjoy.