That's right, it is basketball season. Practice started on Monday- Chad, as of right now, is coaching the freshmen team. We are waiting to see if there are enough guys to make up three teams. The head coach is a little unorganized, okay that is an understatement. He is so disorganized, that it even bothers Chad, that may be a first.
For all of those who don't know, I work part-time at Lutheran Special School and Education Services. I work a full day on Mondays and so Lilly usually goes up to Germantown. Aunt Kendra doesn't have school on Mondays, so she usually is the one babysitting. Then she comes home with us and the girls and I take her to school on Tuesday mornings. So Monday night, I took the plunge and chopped my hair, and I mean chopped. There was a lot of hair on the floor when it was all said and done. Emma also got a trim. Now her bangs are almost as long as all the rest of her hair. 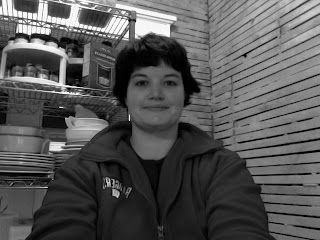 I am still getting used to the short hair, but with is all said and done I really like it. All the moms on Tuesday couldn't believe I chopped so much off. We went to the movies on Tuesday night (my moms group) and one of them didn't even know it was me for a moment.

Do you ever have one of those days where you wonder where is all come from, meaning your strength to just be able to get through the day? Yesterday was one of those days. I was so tired, but Lilly and I still went to the YMCA like we do every Tuesday, Wednesday, and Friday while Emma is at school. On Wednesdays the three of us (minus Maddie) go to school and eat lunch with Chad. So that is always a process in itself to get them and our lunches upstairs with no one falling or running into any high schoolers. Also, we deal with every Wednesday Lilly crying when we walk into Chad's room because Alex, his teacher aide is always right there. It is so funny because by the time he leaves for lunch after we have been there for 25 minutes, she is usually throwing him kisses. So Lilly normally falls asleep on the way home so then I have the task of trying to get her into her bed without her wanting to stay awake. So yesterday it was all good, got her in bed and so Emma and I were hanging out and I could not keep my eyes open it was like I hadn't slept the previous night. Emma was great about playing with her polly pockets and Barbies while I closed my eyes for a little while. Then we got the dreaded phone call that a mom hates, from Maddie's school telling me she is in the nurse's office because she isn't feeling well. So we get in the car to get her, she hasn't thrown up yet, she is the 5th kid down that day. We are getting her backpack to leave and she makes it to the bathroom just in time to lose her lunch. We get home, she gets situated on the couch and after some resting is looking a little better. The poor girl is hungry, so we had a little gatorade to make sure it would stay down. A little while later we move on to the yogurt, that wasn't as successful. Of course, this time she didn't make it to the bathroom in time. It just wears me out thinking about it all. I guess that is why I was sleeping by 9pm last night.

She is good today, a 24 hour thing. She stayed home just to keep those germs away from school. These are the days when I remember why I send her to full day kindergarten.

Here are a few pictures of the girls from the fall. 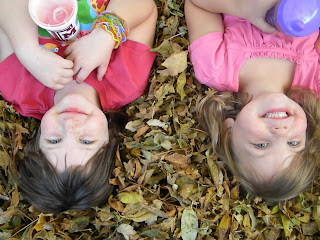 Here are Maddie and Emma hanging in the leaves. They even helped rake them into a pile, so they could jump in them. The funny thing is, that both the girls are still wearing shorts in the picture. We have had a few days of needing our winter coats before this week, but really this past week we put away the fall coats and brought out the winter ones. I would say that is pretty good, it being November 18th and all. 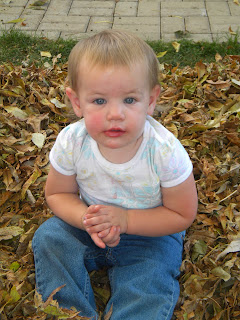 Same day as the one above. Lilly was a little less interested in jumping in the leaves, but did like being able to throw them up and watch them fall. 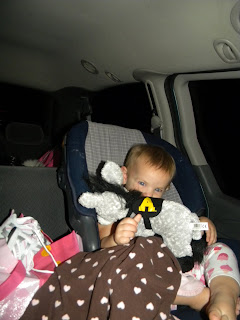 We went to Minnesota on a weekend in September. We went on Friday after school. Here is Lilly with her Army Mule that she carries around everywhere. We like to take pictures of her and "donkey" and send them to Michael to show him where her and "donkey" have been. 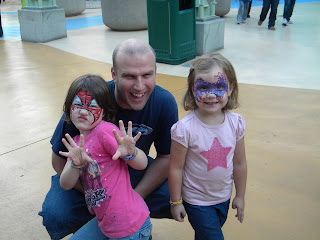 Jay thought the girls needed some facepaint. If this isn't a perfect characterization of our children, Emma the Butterfly and Maddie as Spiderman. This is that weekend in Minnesota. Saturday we spent the whole day with Jill and Jay. We went to this awesome hole in the wall (aka bar) for burgers. We did some hanging out at the MOA. Emma was in heaven in the American Girl store, Maddie tried her hand at a bunch of rides at the Nickelodeon "theme park". Sunday while Chad went to the Vikings/Lions game with Mike, we took Nolan with us the Minnesota Zoo. We had fun walking around and seeing all the animals. I think we did a pretty good job at tiring the girls out too. 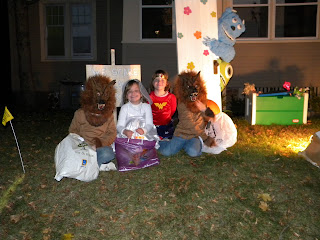 This is the neighborhood trick or treat. This was on Saturday night. The two werewolves are Ben and Sam, along with Wonderwoman, and a Bride. We decorated the house as Monsters, Inc. Everyone thought is was great. We also had the projector playing the movie the whole night too. Lilly was a little glittery fairy, but refused to be in the picture. She is quite the little stinker. She sure has a mind of her own and no one is going to change it for her.

Maddie spent Thursday at home with Lilly and grandma. She was her "normal" self by Thursday morning, but we didn't want to give the 5K any more germs. So Friday we were back our normal routine. We spent a little time at the mall on Friday after school, because we got to see Phineas and Ferb. Emma wanted nothing to do with them, but Maddie was up there dancing and trying to win prizes. She didn't win anything, but she did get her picture taken with them. 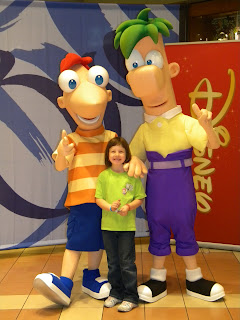 So there is where we have been. Look for more frequent updates on our lives. We are busy, but I know that some of you like to see pictures of the girls, that are more recent then 6 months ago. Happy Thanksgiving to everyone. Be thankful for all you are given and make sure you let those around you know how thankful you are for them.

I know that it is not New Year's, but I am making a resolution for myself. I am going to blog at least once a week. I figure that if I write a little each day or each couple of days and then on the weekends I will post it. I have updated the look of my blog and now I am going to keep it updated, so look for a new post this week.