I never know where the time goes

So my last post was 11 days ago, but it seems like it has been like a month. That is what happens when there is always something going on. So the last few days have all run together and most days I have to stop and think what day it is and where I have to be.

The first week back at school was an adjustment week for everyone. Maddie was adjusting to being back at school, Emma was adjusting to not having Maddie or dad around the whole day. Later that week we had an ultrasound and lots of laughs to go along with it. You can read Chad's post about it on his blog. The weekend was basketball I had a game Saturday and uncle Kurt also had a game on Saturday. We managed our first win of the season last Saturday. Friday evening Chad and I managed to go out for dinner, just the two of us. Saturday after all the games, Kurt came home with us and Emma went to hang out at the Janetzke's. After all the kids got back to their respective homes, Chad, myself, Ben, and Christina went out for a little while. The rest of the weekend was spent just hanging out and relaxing.

This week was something going on every night of the week. Monday I had practice and so the girls went with me. Tuesday was a help day at school for Chad and no practice, so he was home early. So of course instead of just hanging out at home we were off to uncle Kurt's game. We went to the game and were planning on coming straight home because I had a MOPS meeting and so Emma was very upset that she wasn't going over to grandma J's. She wanted to go over there and I told her that if she asked grandma if she could stay over then it was okay. So she marched over to grandma, who was in the middle of a conversation, and asked her. So once again we were down a kid for the evening. Wednesday Maddie and I took Chad to school, then I dropped Maddie off about 20 minutes late because it took us about 45 minutes to get Chad to school and about 50 minutes from there to get to Maddie's school. Both of those drives are usually about 20 minutes, but there was some snow and whatnot, so it took twice as long. I didn't know what to do with myself for two hours with no one. After picking Maddie up, we headed up to Germantown for the afternoon. Chad met us up there after practice and I had a game up near there. By the time the game was over, we already knew that school was canceled for Thursday because of the wind chill. Side note: we did win our game, so that was two in a row. Thursday I ventured to the mall (there was no one there) to get some jeans, then Chad and I went to a dr's appointment, we headed to Target after to pick up a few things.

In the evening I had a game for the tournament and Maddie's school. We were of course playing Maddie's school. The gym was loud, it was their "A" team, they had like 15 girls on their team, and then there was our team. We have 9 girls from 5th-8th grade. They thought that we were so bad that they didn't even start their starters. I kind of took it as a slap in the face, but we played hard in the first half and were losing 10-5 at halftime. The second half was another story. We were out of gas and they put their starters in. I think we scored 2 more points the rest of the game. School was canceled again for Friday, so another day with dad home. Chad still had his game last night, so we were out there for his game. They lost by 2. It came down right to the end. We stayed for the JV game, which was not pretty.

Kurt is staying with us this weekend since mom and dad are at a conference in the Dells. We picked up some pizza on the way home. Once the girls were in bed, they played some Wii and I went to bed. It was off to more basketball this morning. Our game went about as well as Thursday's was. Chad took the girls out to Martin Luther for Kurt's game. He is still out there doing some baseball inventory. I have another game this evening. Hopefully we can pull out one win for the tournament.

Tomorrow we are heading out to Germantown to spend the day and night there. Chad and Maddie don't have school on Monday and we have canceled practices for that day. Even after having the last two days off, this one was planned so it is a little bit more relaxed. Chad has to make up finals next week Tuesday and Wednesday, so that will be taking half of the week. We have more basketball for him and I have another tournament next weekend. One of these days things might slow down, but I am not counting on it.

Christmas and the New Year

Well Christmas has come and gone and sorry if you were looking for a Christmas letter from us, you can stop checking the mail. I don't even know when I would have had time to write or go to the post office to mail them. So here is the low down on our Christmas.

When we last left we were having our snow day- which all of us enjoyed a lot. We watched movies and just hung out all day. The next day I had a game, uncle Kurt had a game, and Chad had a game. We lost our game 15-16, I think uncle Kurt won, and I know that Chad got his butt kicked. The Chapman's were also around that weekend, so we hung out with them.

Monday evening we headed up to Germantown to spend a few days with the Janetzke clan. Everyone was there and we had some good laughs. We spent the days playing Wii, cards, and watching movies. We also took some time to decorate Christmas cookies. 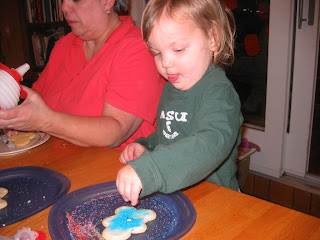 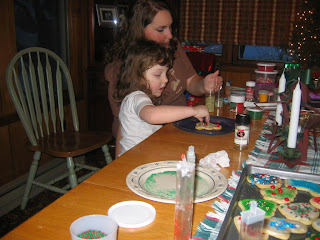 Chad, Kathy, Scott, and myself even managed to leave for a little while to run some errands and get something to eat. Tuesday Chad's practiced got canceled and so we just got to hang out more. Christmas Eve was playing in the snow, while the boys shoveled and broke the ice off of the driveway. 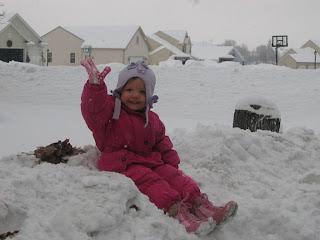 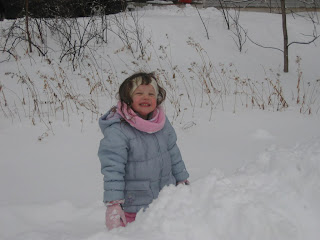 We went to church 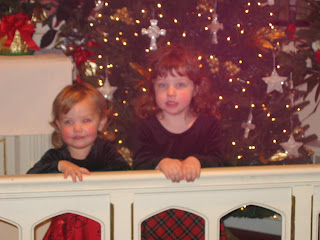 and then came home to open presents. 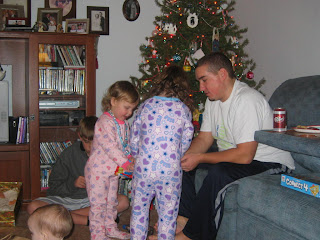 The Janetzke family got their own Wii and I wish I would have had my video on for the camera to capture the reaction of Kurt and Ben. We went home Christmas Eve night.

Christmas morning was church and then we came home to open the presents from Santa (meaning what we bought for the girls). The Chapmans arrived later in the morning and then we just hung out and played until we headed over to my aunt and uncle's house. We had a good time just hanging out, playing games, watching movies, and the kids played hide and seek for like 2 hours.

The weekend came and we headed out to the indoor waterpark for the weekend. We went out on Saturday night and stayed. The Pownell family and Chapman family stayed too. 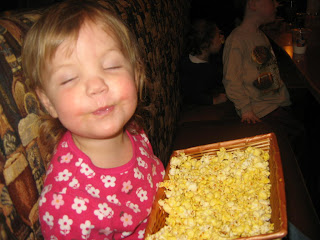 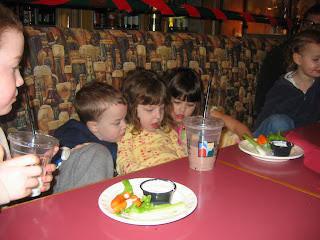 My brother and his family came up for the day on Sunday and we all had lots of fun at the pool. 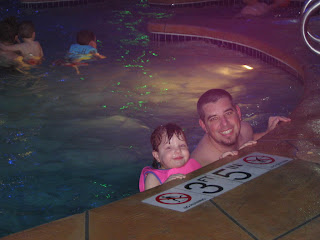 Chad even got to watch the Lions game (they were playing the Packers), but was not happy with the outcome that whole 0-16 is just hard to take.

The next few days were filled with basketball practice, watching movies, hanging out with Jana, Mike and Nolan. New Year's Eve came and went. I don't think I made it to midnight, but it was pretty close. We even managed to watch a movie (Iron Man- I actually liked it). Jana and Mike went home on New Year's Day and left Nolan here. Jana had to work the weekend and Mike was off to Minnesota for the Vikings playoff game. So the girls enjoyed "babysitting" Nolan over the weekend. 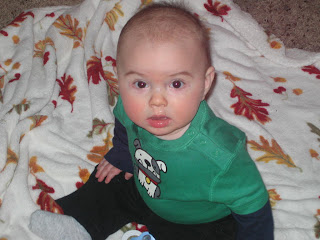 We had another little guy with us on Friday. Eli ( Nic and Ashley's son) spent some of the day with us while mom and dad went to look at a few houses. Sunday we were out to Germantown to drop Emma off because I had to be the helper in Maddie's class on Monday.

Maddie was more then ready to go back to school. On Sunday all she could talk about was going to school. I am glad that she still enjoys going. We had fun at school and then we enjoyed a quieter afternoon with Emma still at Grandma J's. It was back to basketball practice for me yesterday and it is going to be a long next few weeks. Like the fact that I just got the bracket for a tournament we are playing in next weekend. The tournament happens to be the Our Redeemer tournament (which is where Maddie goes to school)- which we are playing the home team in the first round which if anybody knows that means that they know they can win and want to advance to the winners side.

Today was more basketball. Chad had a game, we watched a little of the JV game and then Chad took the girls home while my dad and I went to my cousin's game. Chad won by 18- they were down by 10 at half and finally woke up after half time. My cousin wasn't as successful, but maybe one of these times when I watch her she will win.

The rest of the week is pretty routine- Chad gets to take Maddie to school tomorrow because he is doing Chapel for Our Redeemer, so that will be nice to not have to get her out of the house. Chad is getting ready for finals- not liking that finals are after break after being used to finals before break. We are just getting back into the routine and will hopefully be back into it soon.