Okay so this is our third trip to the pumpkin farm. This time we met some college friends and kids at Swan's pumpkin farm in Franksville. We were a little worried that it would just be too muddy to go, but we took the chance on Saturday afternoon. It WAS muddy,but all of us with our trusty boots, we did alright and didn't come away with too much of a mess. Nick and Ashley came with their son Eli and daughter Addie. Ryan and Kate came with their daughter Michaela, I didn't get any pics of her since she is just about a month old and spent the whole time in the snugglie. We had a great time and it turned out to be a okay day weather wise. The kids didn't want to leave, but we promised them we would get together again soon. So here is the pumpkin farm in pictures. 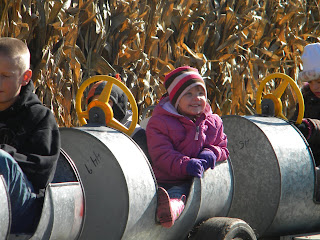 Emma riding the train- you can sort of see Eli sitting next to her. 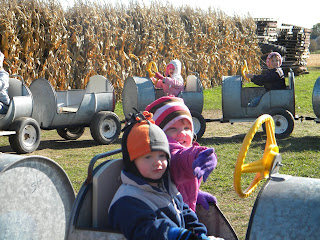 There is Eli, he wasn't so sure about riding with Emma, but she did let him drive. 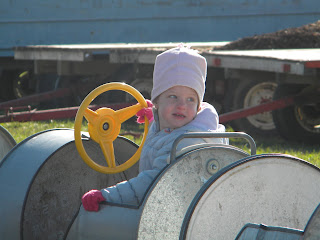 Maddie also took a ride on the train, but was too cool to sit by Emma and Eli. Maddie and dad took a walk through the kiddie Corn Maze, she did a pretty good job and didn't get lost. 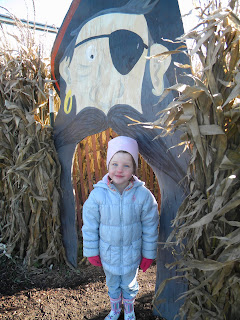 Here she is at the end of it- what a big girl. 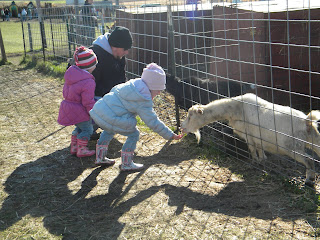 After the train riding, we fed a few goats and sheep. Emma actually held the food and let them eat out of her hand. 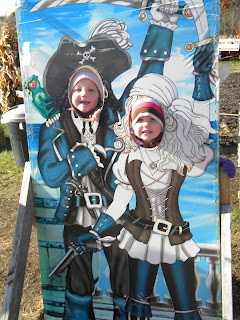 Maddie and Emma, the pirate and fair maiden. 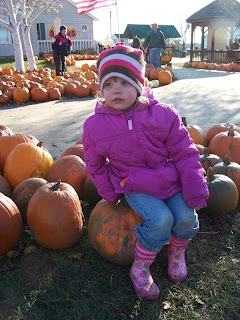 Emma posing for Kate (who was taking the pictures) 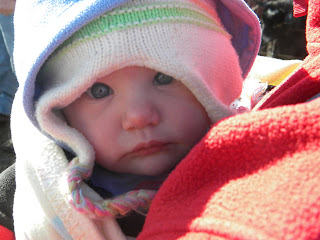 Lilly spent most of the afternoon in the snugglie, but at least it was warm in there. 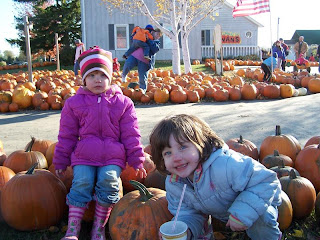 Maddie and Emma posing for Kate. 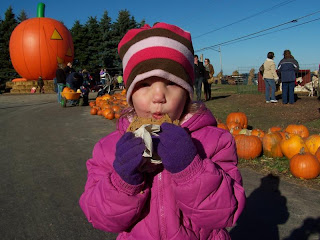 Emma really enjoying her cookies, she ate them both at the same time. 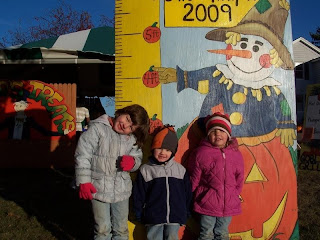 Maddie, Eli, and Emma measuring up. 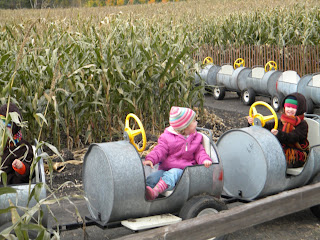 Well you can't see Emma's face very well, but here she is on the train at the pumpkin farm. We met Kate, Ella, uncle Alan, and aunt Tracie there a couple of Sundays ago. Emma and I just went since Maddie had gotten to spend the night at Ben and Sam's the night before, it was her special time with mom. She had a blast with the girls. 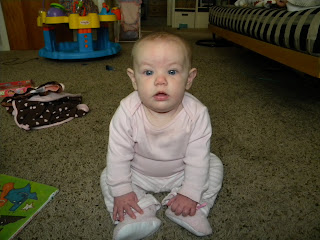 Here is Lilly sitting by herself. She is getting pretty good at it herself. She is getting better at leaning one way and being able to pull herself back before she falls over. The other two girls haven't quite figured out to not be in her face and force her over. She is okay with falling over as long as there are toys within reach.

Here is Maddie's singing debut. Her 4K class sang before the 11am service on the 18th. She has been singing the songs in the kitchen and I was pretty sure she knew the words. They practiced in the room before hand, but when they got into church she just kind of went into shy mode. You can see that she does sing the song, but we always thought she would be that kid in the front belting out the words as loud as she could even if they weren't the right ones. After she was done I asked her why she didn't do the actions for the second song, she told me that the kids standing next to her were smushing her. What a character. The video is just a few seconds over a minute, so it isn't too long.

So many of you know that Chad's dad is no longer at the South Wisconsin District. His contract was not renewed after President Willie was reelected this past June. Don't worry, he is doing fine. He is doing some consulting for the national group called CRM. CRM is based in California, but they get to stay in Germantown since he doesn't go into the "office", instead he goes to churches around the nation and helps them, so need for moving.

So last night we got to help celebrate his 35 years in the ministry. He started as a DCE, did some teaching in there, also some principaling, more DCEing, and then it was to the district for the last 8 years.

It was really neat to see the people (mostly principals), who he has helped with at their schools. Our Redeemer is one and so I know that the many things that he has taught the staff there will be taught to our daughters someday. All the kids, except Scott were there. The girls did stay home with grandma and grandpa (it was at the North Hills Country Club). We got to hear some amazing stories about Gary and all the great work he has done and that was only in here in Wisconsin. Chad spoke on behalf of all of us kids and managed to make it to about the last 2 minutes before he couldn't hold in his emotions anymore. He did a great job.

So here are a few pictures from last night. 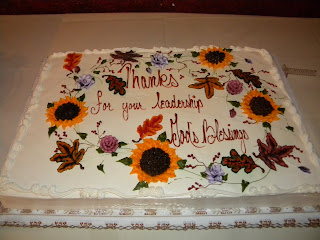 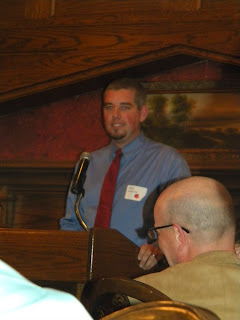 Chad talking about his dad, he is trying to hold it in for as long as possible. 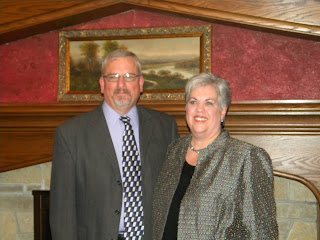 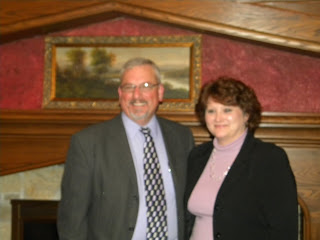 Grandpa J and his assistant Robin 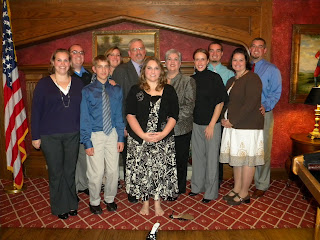 Almost the whole family, well at least those over the age of 10.

That's right, sickness season is here. We haven't had it as bad as others, but it has made it's round through the house. It started last week Monday when Chad came home right after school and went straight to bed. Both him and Maddie stayed home on Tuesday from school. Maddie was just very tired and had quite the snot coming out of her nose, so I thought it better for her to stay home. She had 4 kids gone from her class on Monday, so it is only a matter of time before they all share their germs. Wednesday was testing day for Chad, so he went to school for half a day and then was home early, also feeling much better.

So we were all doing pretty well for the next day or two, well at least until Thursday. I had a bad sinus cold and so I went to bed pretty early, Chad and Maddie had been up in Germantown for the evening and so I was sleeping by the time they got home. A few hours later we were awoken by Emma puking, she tried making it to the bathroom, but just didn't quite get there. She went back to bed for a few hours and then was up again getting sick. Maddie too, but we are pretty sure it was just reaction from Emma throwing up. So after getting everyone cleaned up, Maddie on the couch downstairs with a bucket, Chad on the futon upstairs, Emma and I in our bed (Emma had a bucket too), we were off to sleep for a few more hours. Lilly just slept through it all. Emma ended up missing grandparents day at school, she was so bummed, but we didn't want to spread those germs. So the rest of the weekend we took pretty easy. Chad had to work at Buy Costumes both Saturday and Sunday for baseball, so after Maddie sang at church on Sunday we headed up to Germantown to drop off Lilly so I could help in 3K on Monday. 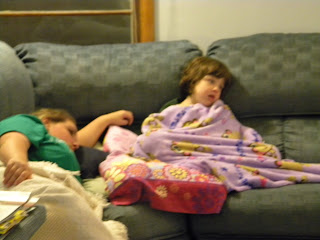 Maddie and Lydia hung out on the couch on Sunday watching a movie. Doesn't Maddie just look like she is in a daze?? 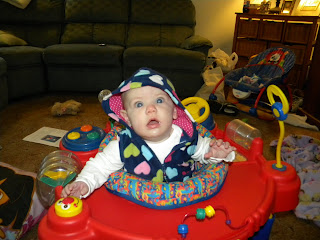 Lilly just playing, trying not to get her sister's germs.


So we thought everyone was back up and running, the girls were doing great and Lilly picked up a little cough and so we were just watching her. Chad came home from school on Tuesday and again was right back to bed, he stayed home on Wednesday. Wednesday after Lilly got up from her nap, she had a fever and was having trouble catching her breath, so off the the doctor we went. We ended up with a double ear infection and the flu (no piggy flu), he just wants to make sure that there was no bronchitits either, she is doing much better with her being on antibiotics and actually being able to sleep without waking herself up with her coughing. So we have survived the last two weeks, the sickness seems to be gone for now and we are hoping that it stays away for the rest of winter.

So sickness we say stay away, we have done our time and want to be done with you.

So today Lilly is 5months old. I don't know her stats, since we don't go to the doctor until next month. She is doing great, rolling both ways. Probably not as much as she would like, since most of her floor time comes after Maddie and Emma are in bed. She is "talking" a lot. She likes to hear the sound of her own voice and she also is starting laugh at being tickled, but also at her sisters in general. She also is able to scoot herself in a full circle and also backwards. We are figuring that by Christmas she should be crawling, just in time to get all those presents under the tree.

So here are some of those promised pictures of Lilly: 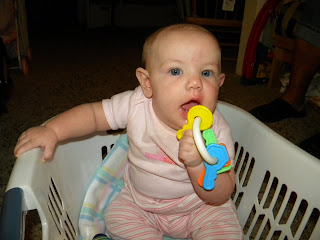 Here Lilly is practicing sitting- she likes to practice in the laundry basket while I fold clothes. 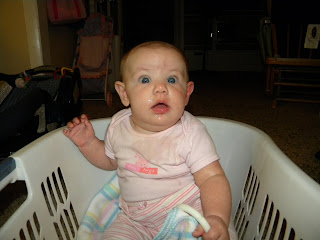 Taken a little by surprised. 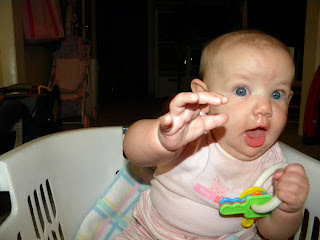 Lilly is also starting to reach and grab at anything. Nothing is safe, especially her sisters' hair. She has got to fight back somehow, right?? 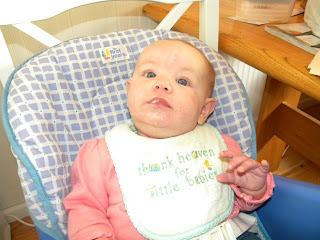 Taking the first taste of cereal- she doesn't think it is too bad. 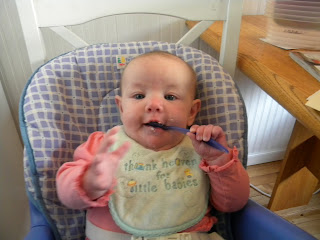 It is usually better when you can feed yourself though.