Where Did The Week Go?

That is often the question I ask myself on any given Saturday. This week has just seemed to slip out from under us. I guess it doesn't help when you spend 2 and a half hours waiting at the doctor's office for them to see you for 12 minutes. We had to go down to the Texas' Women's Hospital to have a Level 2 ultrasound. At the first one, the tech couldn't see everything she needed. So our appointment was at 2:15. Chad left school at 1pm, because it was down by Reliant Stadium. It took us about 55 minutes to get there. We filled out all our paper work and sat down. We sat for about an hour and 15 minutes, when they called us back, not to see the doctor, but to another waiting room where we sat for another hour and a half. The doctor finally saw us. I am hoping that she was just tired from all the patients, because her bedside manners were horrible. She wasn't very nice and then she asked me snottily, "how old are you?". I thinkher, like many people are shocked when I say 25. She then asked me why I was there, and I simply told her that I was told by my other doctor that I should go. Well after the 12 minutes, everything was fine and the baby is healthy and is growing at the rate is should. She was also very shocked when she asked if we knew what we were having and when saying no, we told her we didn't want to know. I chalk it up to the fact that most people now want to know. So we left the hospital at 5:10 in the midst of Houston traffic and I had to be at a scrimmage at 6:15. I did't make it on time, I got there about 6:45. That was how our Thursday was spent.

The rest of the week just sort of slipped by with basketball, Chad being out on the baseball field each day trying to get it ready for practice on Monday, two soccer games on Tuesday, and Chad trying to get his grades done for progress reports. This weekend is a quiet one, I think we might actually attempt to go to a movie tonight. We will see how much work Chad gets done this afternoon. Next week is a short week for me, only having to work Monday and Wednesday, a game on Tuesday, and then leaving Wednesday for Wisconsin. Chad's baseball practice starts on Monday. The nice thing with baseball is that you don't have to share your field, so he always has practice right after school. Until basketball is over, there might be a few conflicts with our schedule, but after basketball is over, it will just be him having practice after school. We have just 4 games left. Two home and two away. The same two teams, twice more. It has been a long season, but a good one overall.

Well I should go see how much more work Chad has to do and maybe find a movie that we want to see.

Well, we actually have teh day off from having to go to work, but I think both Chad and I have been doing more than in any work day. Chad had to be up early this morning to do some work on the field to get it ready for the dirt that was being spread this afternoon. So he was up and out of the house at about 7am, got back at noon, and has to go back for the spring sports meeting this evening. I on the other hand, have not been out of the house, but have been trying to clean it from top to bottom and I mean really clean. I have been so occupied with basketball, that it is lucky that the laundry gets done each week.

Speaking of basketball; it has been going. We have until Feb. 8th and this week we have no games. Tuesday is an off night because the team that we are playing does not have a JV team and the team we were suppose to play on Friday cancelled the game. We did play on Friday, but I wouldn't call it an official game. We lost by 9, but we had no official refs. Of course the two guys from school who could ref (Chad and Phil) were gone in Waco for their baseball coaches' clinic. So we had a dad from north and Kim (a teacher from school) ref. As basketball is starting to wind down, Chad is just starting the baseball season. Practice starts next Monday and I think their first game is on Feb. 11th. It seems odd that the season is starting in January, but with the weather we have here, it makes sense.

We have been keeping busy with all the activities going on and we know that they just get more as the weather gets even nicer and as the school year keeps going. We are looking forward to our visitors coming in the spring and then more in the summer. I am looking forward to my trip home next week and the chance to relax and spend some time at home, in the cold. 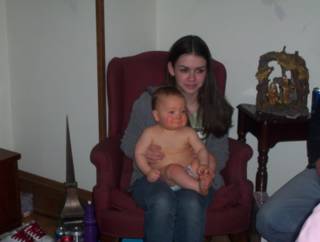 and now he has lost them all with cousin Alex 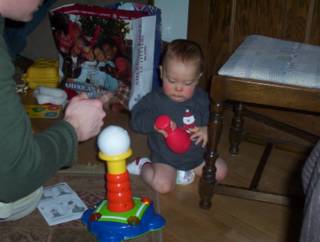 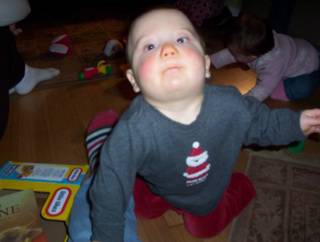 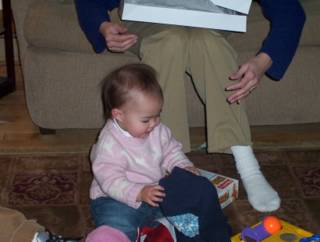 Kate and her new sweater 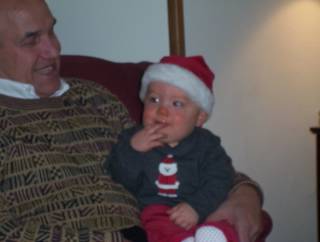 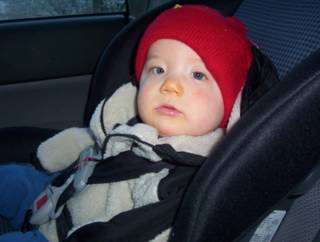 Another shopping adventure with mom and aunt erin 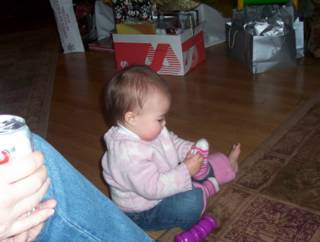 Kate after all the presents were done

It Has Been Awhile

Well, things here have been buzzing by us and so one thing that gets left behind is my blog. This past week seemed to go on forever and now it may actually start to slow down. We have been through new year's, which was a night of card playing and hanging out. I think I made it to about 12:15, before I went to sleep. New Year's Day was a day of football and trying to make sure that everything was in order for the next week. Chad had an in-service on Monday morning. I had the whole day off, besides basketball practice. We played one game this week and I think it may have been the most pitiful game I have ever watched. We just were not all there. Meaning our heads and we were missing a few girls. Work came and went on Wednesday with no real big problems. More basketball and work for the week. We ended the week with three games last night at school. I didn't play, but the JV boys, Varisty girls, and Varisty boys all played last night. Chad was lucky enough to not only be on supervision duty, but when no refs showed up for the JV boys game, him and another teacher reffed the game. He was a little winded after the game. This morning I went to a scrapbooking party, where I bought a few things and got some good ideas. I have now finished taking the Christmas decorations down and Chad is out playing a round of golf. It is back to 75 today after a couple of days of 50's. He is taking advantage of the nice weather. It looks like this week brings on a couple of basketball games, and Chad going to a baseball conference in Waco. We also get to have an ultrasound this week, so that is exciting. January will go by quick, and with no week being a full week of work for me, I can ease back into the swing of things. I am looking forward to my short trip home at the end of the month. As many of us have gotten back into the work routine, I hope that everyone is surviving.