The first birthday we celebrated was Maddie's. On the 5th we went to Red Robin for lunch with grandpa, dad, Emma, Lilly, me and Maddie. She picked it and got a little something from us at lunch. She even got the birthday sundae and the waitresses sang to her. I'm pretty sure I was embarrassed enough for everyone at the table. 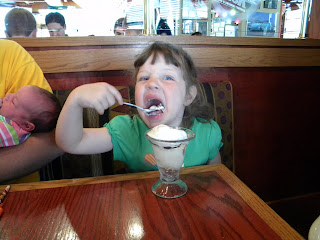 Aunt Amy, Sam, and Ben joined us on Friday night. It was my cousin's graduation at Martin Luther, so Amy, Sam, Lilly, and myself headed to the ceremony around 6. It started at 7 and was actually done about quarter after 8. They only had 72 kids in their class. After some pictures outside we headed home to feed Lilly. We walked over to Jan and Sharon's for a couple of drinks with other family.

Saturday was the neighborhood rummage sale, so some of us headed out to find some deals. A few were found and all the kids found some toy. The afternoon was spent playing with cousins and then we had some people over for cake for Maddie's birthday. She requested a rock star cake, so we made a guitar cake by tracing the guitar hero guitar and cutting it out from there. It was pretty small, so we just made a big star too. Maddie helped decorate it and so it was her own. We let her open her presents and then we just ate cake. Nothing too involved, but we couldn't let her birthday go by without a little party. Chad and I got her a bike for her birthday. She has been out on it a couple of times, but only rides it for a short period of time because I don't think she is quite sure of herself on it. Sunday we headed out Germantown and spent the day hanging out with aunts and uncles.

I decided that it was time to get some pictures of all three girls since I had requests from great grandma Bickel and Shelly. So I got them in the only matching clothes that they all have- Brewers clothes and started taking some pictures. Some turned out good, others not so good. Speaking of those pictures, I ordered them last week and they still haven't gotten to the Walmart. I will have to put that on my to do list to investigate where they are. So here are a few pictures from that morning.

Last week Wednesday was the Martin Luther golf outing, which meant Chad was gone for most of the day. Maddie and Lilly had doctor appointments in the morning. Maddie is weighing in at a big 48lbs and 44inches, while Lilly is weighing in at 10lbs and 4 oz and 21.75 inches long. She doesn't have any trouble eating as you can tell. We have to go for a renal ultrasound to check her kidneys because of the two vessel cord, but the doctor doesn't think there will be anything abnormal since she is growing more then enough. After our appointments we headed up to Germantown to hang out. I had packed stuff in case anyone decided they wanted to stay- well of course Maddie did and Emma followed suit. It worked out anyways because Thursday they were going up there anyways. Mom, Lilly, and I went up to Oshkosh to go to the American Girl Warehouse sale- one word NUTS. We got there and it was a four hour wait to get in the door. We went over to the outlet mall and found a few deals. Went to lunch at Friar Tuck's where I felt like I was transported back to 1976. Good food and pretty much still 1976 prices. Even the waitresses had little friar uniforms on- they were brown too. Went back over to check the warehouse sale- it was a two hour wait. We decided to call it quits and head home. 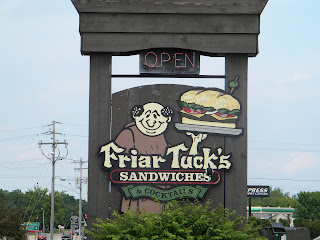 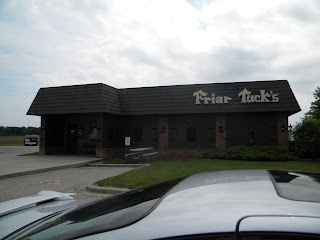 The Pownell family arrived Thursday night- we went to the zoo on Friday morning. Friday night we went for a fish fry- it was so good and only $4.99. Saturday was Alex's graduation party. Chad took Maddie to see Up in the later morning, then Amy, Ben, Sam, Emma, and myself met them at the mall to eat lunch. It was to get the noise out of the house for Lilly and Nolan to nap. We headed to the party where the kids just played outside for a good 4 hours. Sunday was Nolan's first birthday party. We tailgated at the Brewers/White Sox game. This was the first time since Lilly was born that the whole Heffelfinger family was together. Some went to the game and others (like us) came home to nap and relax. After the game we let Nolan dive into his Elmo cake. It took him a few minutes to get into it, but he looked like he was enjoying himself.

Monday was a recovery day- we did laundry, hung out, and then headed to the baseball banquest. We cooked out for the third day in a row- it is Wisconsin- how can you not love brats. Grandma and grandpa came and got the girls so we could clean up the cafeteria. Then we decided to grab a drink with Ben, Christina, and Iggy- the other JV coach. Today we ventured to the Central Library for story time. The girls had a good time. Maddie was much more into it them Emma. Emma was alright to start and then when we had to go into the story room- she had her normal break down and telling me she wanted to go home. We went in, she sat on my lap and by the end she even ventured down on the carpet next to Maddie.

Chad has decided that Thursdays and Fridays are days he isn't going to to into school. Last week he was finishing up stuff, so tomorrow we will have to plan something fun. Next week Maddie is going to VBS at Mount Olive since her school isn't having one this year. Chad also has basketball camp all week, so that means that next week he will be gone like a normal school year week. We then have a week to get ready for camp. We leave on the 6th for Michigan and are there for at least 5 days, but maybe until the 12th. We will see.

Hope you enjoyed all the pictures.

Have you ever tried explaining summer vacation to a three year old?? Maddie gets that she doesn't have school, but she doesn't get why everyone gets so excited about summer vacation. She likes school, so why is everyone happy about not having to go- she just can't grasp it. We actually had two days this week, but are now officially on summer vacation. Chad has meetings today and tomorrow (if you can call golfing this afternoon meetings). Graduation is tomorrow and then he has some things to tie up next week. He figures his vacation starts next Friday.

This past weekend Chad was in Texas to give the speech at Concordia's graduation. It was a short trip for him, but he had a good time. He got to see people and catch up with them. Friday before he left he had the first round of regionals and won. He was off on Saturday around 2pm and got back Monday around 2pm.

The girls and I took in the Brewers game on Sunday with grandma and grandpa. We went a little early and took subs and met my aunt and uncle in the parking lot to hang out before the game for a little while. Lilly and grandma spent the game in an armchair in the warm watching the game on television. It was a little chilly in our seats, because the sun is behind us by the time the game starts and even with the roof open we are in the shade. It was a great day in the sun, but everyone in the shade was cold. Maddie spent most the game eating peanuts and then spent a little time up by grandma. Emma actually spent the majority of the game with me in our seats, eating peanuts, watching for Bernie Brewers, laughing at the little Chorizo fall down during the race, and covering her ears while Hell's Bells played. 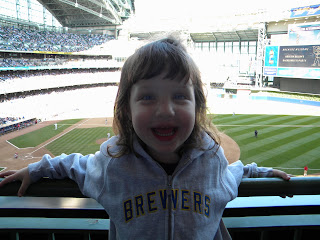 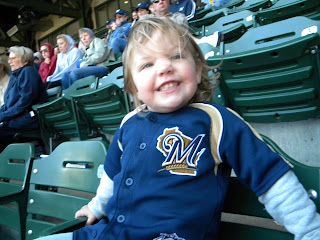 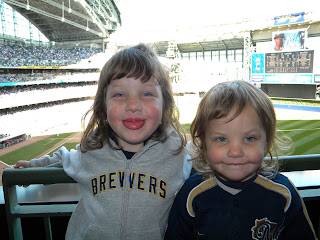 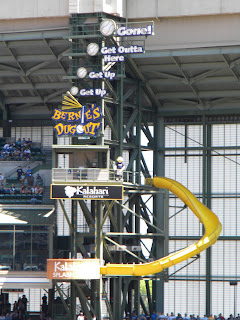 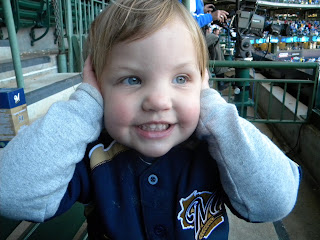 Tomorrow is Maddie's birthday. We are having a little cake "party" for her on Saturday. She wants a rock star cake, so we are making a guitar cake and then a star cake. We traced the guitar hero guitar and will be using that as our pattern for the cake. Grandpa has off tomorrow and so I told her that we would go for lunch somewhere. I figured she would pick like Chuck E' Cheese, but today she said she wanted to go to Red Robin. We will see if she changes her mind between today and lunch tomorrow.

Since Chad won on Friday they played on Tuesday evening. The game wasn't until 7pm, so just Maddie and I went. We actually rode down there with grandma and grandpa J, uncle Kurt, and aunt Lydia. It was a good game. They lost 7-4, but it was 4-4 going into the 6th. So baseball is officially over now. 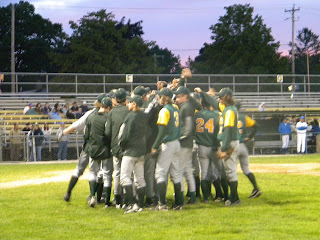 The last couple of days have been nice, so we have spent the later morning at the playground. Yesterday we went to Wick Field and played with some other kids that were there and today we went to the playground at Washington Park and had it all to ourselves. When we all go Maddie has to be a big girl and walk because there isn't any room for her in the stroller, but she is doing a great job and only complains a little. It is to be expected since it is usually on the way home from the playground, so she is already tired from playing. I told her that when you are the biggest sometimes you have to do big girl things. Today on the way home Emma was nice and let her sit in the stroller for about 4 blocks and then wanted back in- I thought it was pretty nice for Emma to give Maddie a little break. 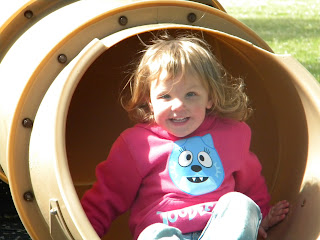 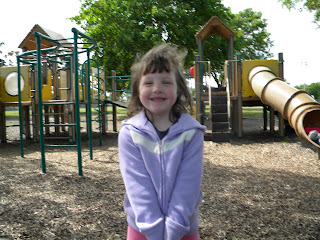 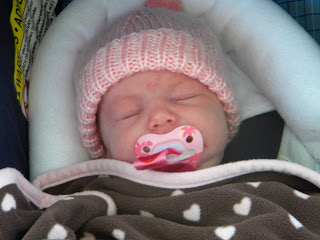 So here's to Summer Vacation- even if Maddie isn't quite so sure about it. All she knows is that dad will be home and we get to have fun.