So Christmas morning it was off to grandma and grandpa Heffelfingers for church and seeing all the cousins. After church they played and played and played. There weren't too many fights and overall everyone seemed to get along. Some of us watched a movie and just had way too much fun poking fun at it. My brother thinks there should be a Cheesey Movie channel and it would just suck people in, I have to agree. The living room was a little like Mystery Science 3000. We all headed down to Susie and Kip's house in the later afternoon. The kids had fun running up and down the stairs. They played and played some more. We managed to get a game of Trivial Pursuit in. It was the Pop Culture Edition- so we knew most the answers. We had another great day of celebrating with family. The girls were having so much fun with their cousins, that they didn't even open their presents from us until Saturday morning. They were too involved to even worry about it. It was really nice and made me feel like they weren't all about the presents, but enjoyed being with family.

Now Saturday morning, they ripped their presents open and again loved them all. They couldn't wait to open everything. Saturday we just relaxed and then on Sunday we headed over the the Country Springs Hotel where Jana, Mike, and Nolan were staying to have a couple of hours of playing at the indoor waterpark. Lilly enjoyed splashing in the pool. Maddie and Emma had fun taking turns with Daddy and uncle Mike going down the big slides and Nolan could have cared less about being in the pool. We ate some pizza with everyone and then headed home. Christmas weekend was over, but the girls still like each other (at least 75% of the time). They have been playing with their new games and toys, and even sharing them with others.

We still have the week of break left and so we will see what that brings.

Chad had his last day of school on Friday the 18th, but Emma and Maddie still had school the following week. I helped his mom at Trinity with their Christmas Shoppe and so that meant that Chad had to be the 4K helper on Monday. He had an exhausting day, but he made it through with no one throwing up on him. (last year someone blew chunks on him) He even took Maddie to the doctor after school. She had quite the ear infection with fluid in her ear. She got on her antibiotics and is back to her normal self. Tuesday he took Emma and Lilly to practice with him while Maddie was at school. Wednesday we headed up to Germantown. We baked some cookies and hung out for the afternoon. In the evening my cousin Alex came over to watch Emma and Maddie while the rest of us went to a funeral. Chad's mom's cousin passed away the weekend before Christmas. Thursday we all hung out during the day, got ready for church and then came back home for celebrating. We ate and opened presents. The girls were having tons of fun. They loved everything they got. After they finally settled down, they hit their pillows and were fast asleep. We had a great time celebrating with the Janetzkes.

A little part of Texas in Wisconsin

So the Tuesday before Christmas we got a chance to hang out with Christa, Paul, Isaac, and Faith who made the trip from Tomball to see the rest of their family up here. We met over at Julie and Bob's house (Christa's sister). It was like we were part of a little Kasten get together. Julie and Bob go to Our Redeemer and their Carter and our Emma are in the same class. Julie also was Jana's roommate in college. Then you have Christa and Paul who were at Concordia while we were there (Paul is also Chad's college baseball coach's brother). Then their brother Luke went to Westland High School which is where Chad went. Not only are all the Kasten kids linked with us, but Mr. Kasten is one of Lydia's teacher's at Living Word. What a tangled web of the Lutheran world we weave. We had a great time just hanging out, the kids played with every toy in the basement while we all just talked. It was a relaxing evening and fun to get to see how big Isaac and Faith have gotten. The "big" kids spent most of the night downstairs, so there are just a few pics from that evening. 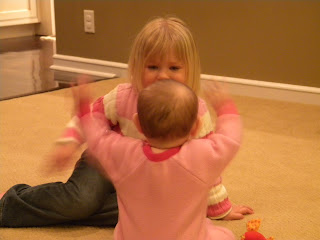 Lilly showing Faith how big she is. 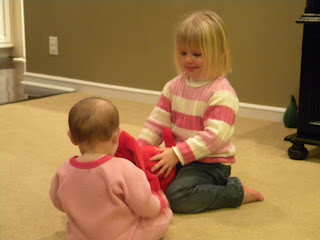 Faith doing a great job sharing her toys with Lilly 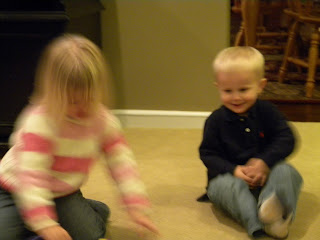 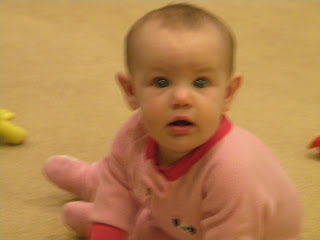 Lilly just hanging out with all the adults while the big kids ran around down stairs.

Thanksgiving, Sprecher, and Everything Inbetween 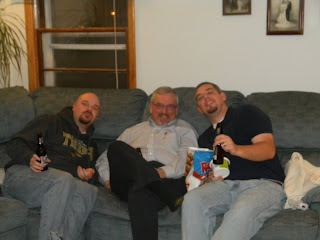 So here is what began our Thanksgiving vacation. Chad had a student help day and practice on Wednesday, but we then headed up to Germantown to go to church and enjoy some sibling bonding. I was determined to for everyone to hang out, I mean come on we are all almost adults and we are always going 17 different directions when we are all there. So after church the outlaws: Scott, Christina, and myself went down to the Sportszone on Mequon to have a couple beers and hang out. While we were gone, the originals got some little kids to bed (meaning our girls and the boy cousins) and just started the party. We laughed, talked, played some games, laughed some more. I think that everyone had a good time, if you didn't then you can correct me. I think most of us were on our way to bed by about 12:30, but there were a few (those without children) who stayed up even later. 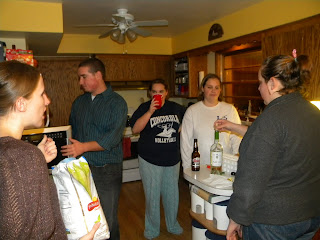 Some people gathered in the kitchen to have a drink and talk. 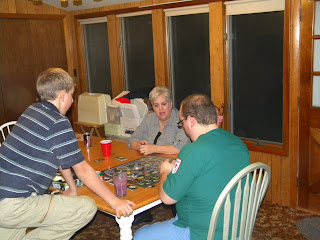 Others played Clue on the back porch.

Thanksgiving morning came way to quick, at least for me, I know I am old. I made a run to KMart, you might think I am crazy, but I got some really good deals on some things the girls really wanted. It is hard to pass up buy one get one on things like v-tech games, barbies, and baby toys. We all managed to fit on the back porch for dinner. That's right all 17 of us and we only had to add a card table at the end. The little kids minus Lilly were sitting at their own table. It was pretty impressive if I do say so myself. I am guessing that that may be on of the last time that happens. Maybe we need to get some banquet tables for the back porch, you know the ones like they have at church. We actually headed home that night to have cake for my dad's birthday which landed on Thanksgiving this year. Before we left we did do some Christmas gifts for the kids, since Kathy and Scott will be in Saint Louis for Christmas. It was fun to see them try to figure it out, they knew it wasn't Christmas, but believe me they weren't complaining. 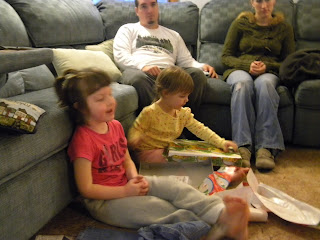 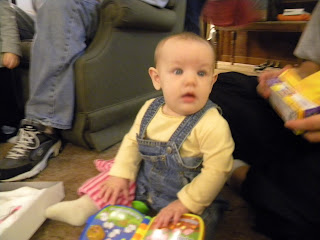 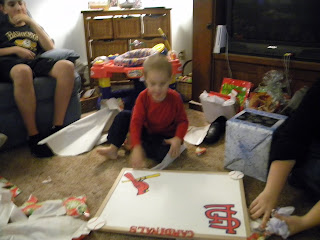 Friday morning I did venture out to three stores, Wal-Mart $3 pajamas, Target $5 Barbies, and KMart $7.99 Christmas dresses for the girls. I left around 5:45 and was home just before 8. I knew what I wanted, I didn't need anything that bad, so I wasn't mad if they were all out. The rest of the weekend we hung out since the girls were feeling a little under the weather.

Sunday was the first Soda with Santa at Sprecher Brewery. It is this really cool thing they do, they have been doing it for the last couple of years and I hope that they continue it. So we were down there with Sprinklefingers to do some cookie decorating for the kids while they were waiting for the soda to be done. What happens is you come in, get your picture taken with Santa, go on the Brewery tour and while you are on that, they put the picture you took with Santa as the label of root beer bottles. It was fun watching all the kids and their reactions to Santa. There were a good number of criers. We did that for three weekends. The girls came down the second weekend. Emma wanted no part of the picture, so we have a case of root beer with just Lilly and Maddie. Then after the tour started it kind of clears out, so we thought that maybe she would do it if we all were in the picture. She did and the bottom picture is one that is now on 6 bottles of root beer. 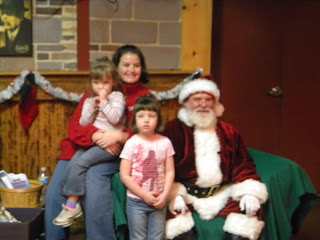 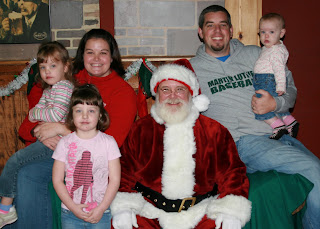 The man who plays Santa is an employee of Sprecher and does such a great job. This past Sunday was the last one. There were 2 week old twins, then my favorite kid of all three Sundays: I think most of you have seen Elf, you know when they announce that Santa is coming and Buddy yells "Santa- I know him" this kid yelled Santa the exact same way and was shaking with excitement. I could not stop laughing. There were a few who brought their letters for Santa and then another favorite who brought a picture from a magazine of what he wanted. 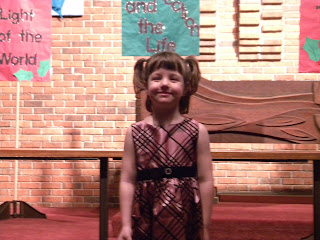 We also Maddie's Christmas program thrown in there too. It was back on the 2nd of December. At Our Redeemer they break up the grades and do their Christmas programs as the Advent service in the evening. It is kind of nice so you don't have 500 people at one program and there is more opportunity for the kids to sing more and be involved more. She did great and sang out. The people next to her weren't squishing her this time, so she was able to do all the action.

So we are now about 10 days away from Christmas. We are going to Woodstock this weekend to celebrate Sammy's birthday. Chad is done with school this week and the girls have two days next week. Since he is off on Monday, he gets to be Maddie's helper. She is so excited that dad is going instead of me. The Keipers from Texas are coming and so we are getting together with them either Tuesday or Wednesday evening. Maddie cannot wait to see Isaac. She told me the other week that she is going to marry him. What a goof.

Also don't forget to watch Amy on A Home For The Holidays (it is an adoption story) that airs on Wednesday the 23rd on CBS. It is either a 7pm or 8pm thing. You would have to check your local listings.

Thanks for sticking with me and this long post. Here is a goofy picture of Lilly trying to get her whole fist in her mouth. 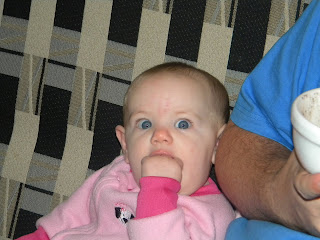