Giving Thanks and Snow Flurries

So as always around Thanksgiving, everyone wants to know what you are thankful for. I know we all are thankful for food, shelter, family, and friends, but I wanted to point out a few particulars when it comes to those three crazy girls we call daughters.

She is quite the 5 year old. She loves music and anything that has to do with music. Just yesterday we went to the library and got 7 cds to put onto her mp3 player. Since those songs have been on, I don't think she has taken her headphones off. She is always moving, running, jumping, playing some sort of ball. She loves to be wherever her dad is, and do whatever dad is doing. She is also a big help around the house, she usually does what is asked; even if that means going to get a diaper for Lilly or picking up toys she didn't play with. She will try anything and everything, especially when it comes to fun things, but also at the dinner table. She loves school more then anything and loves to write and make up stories. She is a unique little girl and I can't wait to see where her next adventure takes her. 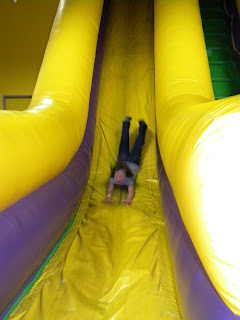 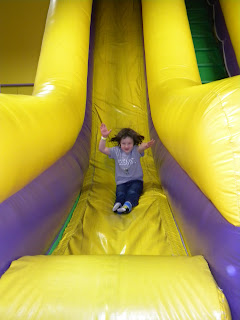 (both of the pictures of Maddie are from Monkey Joe's at the beginning of November, as you can see the daredevil in her- going down head first)


EMMA
She is our social butterfly, loves to talk to everyone and anyone (we have to watch that sometimes). That being said, she is quite the homebody. She is most happy at home playing with her barbies, polly pockets, or just coloring (you also have to watch that, because she will color on anything). She is definetly the mothering type, she loves her baby dolls, helping Lilly, and being the little mother hen for Lilly and Nolan when everyone is together. She also loves school. She is smarter then she leads on, example she knows what a letter is but will always ask you just to have that interaction with you and make sure she is right. She is a whiz at puzzles. She will walk past the puzzle grandma J is doing, pick up a piece, look at it, and put it in it's correct place. She doesn't like to take as many risks as her sister and she is okay with that. She stays in her comfort zone of peanut butter sandwiches and go-gurts. She is a chocolate milk- aholic. She loves her princesses and playing dress-up, she also never passes up a chance to have her hair or nails done. 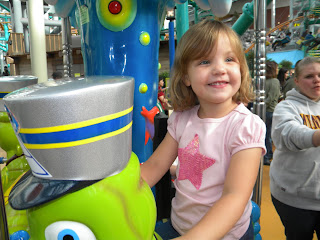 Riding a little ride at Mall of America 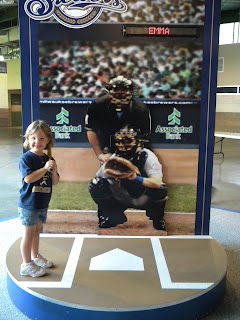 One of the last Brewers game we went to this fall

LILLY
Oh boy, does this one have her own personality. She wants no one to help her and that includes her sisters. Some days she reminds me of Maddie as she is climbing the chairs and sits in the middle of the dining room table. Other times she is like Emma as she can just sit and play with her bebe (think of it in French) that is what she calls a baby. She is a ham and loves to do her "tricks". She loves the bath, but hates the sprinkler. She loves Mo-Mo (Elmo). She can look at 100 books a day, she also expects you to read that many to her. Lilly is a bruiser, she loves to wrestle anyone who is laying on the floor. She loves to laugh and thinks that the world is her audience. She also loves music and loves to dance. She can't go to bed before giving everyone a kiss goodnight- it doesn't matter who is there, she has to give one to everyone. She loves her donkey (Army Mule) and takes him everywhere. Let's just say he is getting his share of time in the washer. She loves to go to the YMCA daycare and play with the kids there. She also loves to wave good bye to everyone, no matter where we are. She is a girl who is just trying to be her own person and I will be interested to see how her sisters pull her in their directions. 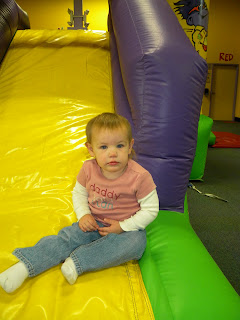 Lilly at Monkey Joe's she was trying so hard to get up the wall to slide, but she just wasn't quite big enough, which of course ticked her off. 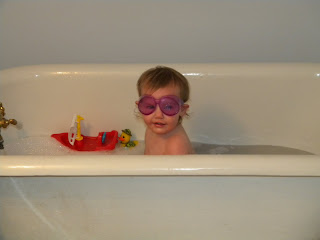 Here is that ham- in the tub with the swimming dog's goggles on. Now every time she is in the tub she has to put them on.

In the quote of Emma- "It is going to be a great day, because there is snow falling"

That is what she said to me today when I picked her up from school. What she doesn't realize is that all it is is a dusting. Now don't get me wrong, I'm sure we will get our fair share, it was just to cute that she was excited for the first snow. It took until December for that to happen, so we are just hoping that winter doesn't last until May around here.

The girls got to watch their first Christmas Special last night- it was the cartoon version of How a Grinch Stole Christmas. They get that love of Christmas specials from their dad. Good thing we have DVR now because with basketball he misses a lot of them, so now I am able to record them and they can all watch them later. The girls get so excited about all the classics; Rudolph, Santa Claus is coming to town, Frosty. Now they like the new ones too, but I think they just love the classics because dad gets to into them too.

The older girls are in their Christmas program next week, they cannot wait to sing for everyone and Emma is so looking forward to wearing her sparkly Christmas dress. This girl loves anything that sparkles and shines. I will make sure to put some pictures up of that night.

So as December starts and we all know how crazy it can get; baking cookies, buying presents, wrapping presents, seeing friends and family, let's make sure we always take time to remember that little baby that came to us that first Christmas as the best present anyone has ever received.