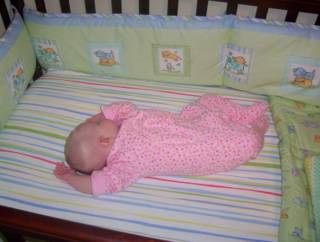 Here's where we start... 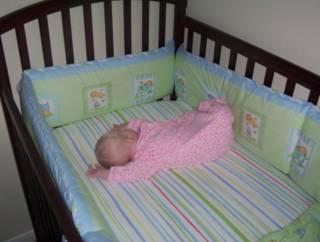 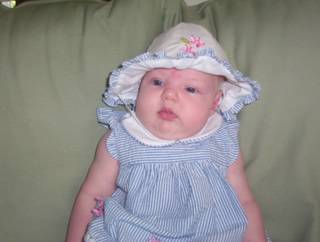 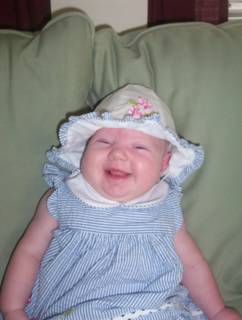 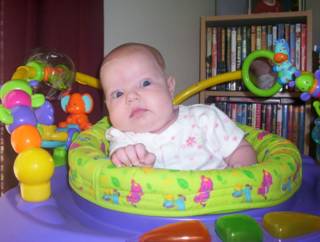 mom, I can't take this much excitement 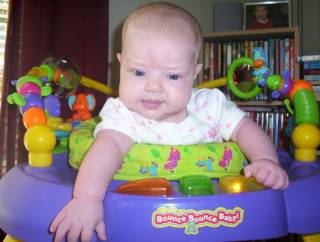 how does this thing work??

Well I did promise more posts and I am actually following through on it. I have Maddie sleeping on the boppy pillow in my lap right now, so I have figured out a way to do all of this with her and I have come to realize that I can do lots of things one handed now. This weekend hasn't been filled with too much excitement. There was no varsity football game, so we went to the JV game on Thursday night (Michael Wilke) plays JV. They won by a good handful. It was pretty hot, but Maddie liked being outside and all the parents gushing over her, students too. Friday night we invited Luke over (the student teacher who roomed with Chad's brother Josh at school) and we went out to eat and then came back and the boys played video games while Maddie and I went to sleep. Saturday brought laundry and grocery shopping and then Chad went over to school to do some work on the baseball field. We also watched lots of baseball this weekend, with the Braves at the Brewers, we were able to watch them on TBS all weekend long. I thought it was going to be an alright weekend with the way we played on Friday, but I was wrong and was disaapointed both yesterday and today. Today was church. Usually it is a circus trying to get all three of us out the door in time, but Maddie has been sleeping until about 7:30am (from 10pm) the last couple of nights and so I was able to get myself ready before she was even out of bed. I am praying that she keeps it up and continues to sleep through the nights. For the last couple of weeks she has been sleeping till abotu 6/6:30ish and now this weekend it has been 7:30. This week is a shortened week with Chad having a half day on Friday and then no school on Monday, so that makes life a little bit easier.

Maddie has been babbling for awhile, but loves to talk to her ceiling fan. It seems that she is a morning person, because that is when she talks the most. She was talking to grandma on the phone last night. We are getting into a routine and mom is really enjoying that. We can hardly believe that she is going to be 3 months old next week.

Mom Heffelfinger Happy Birthday Wednesday( Hope dad at least takes you out for dinner) Sorry if the present is late we aren't going to get to the post office until tomorrow morning.

Have a great week 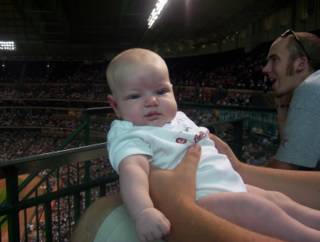 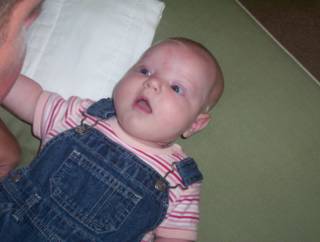 Telling dad all about her day 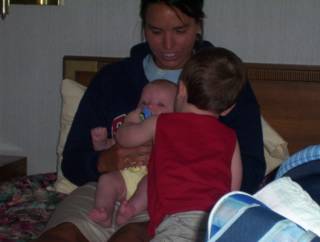 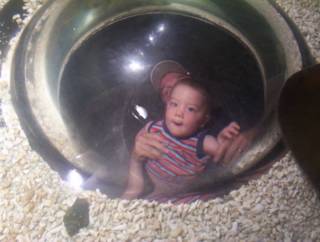 Ben and grandpa at Aquarium 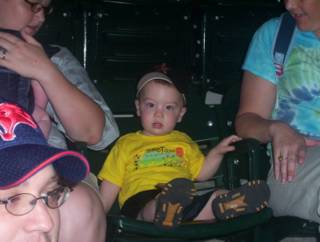 Ben taking in the Astros game

I Promise to Blog More Often

Well it has been awhile and I could give excuses of why I don't blog as often as I should, but you have all heard them before. So all of you who do read my blog, I am vowing to you this 23rd day of August 2005 that I am going to begin blogging again on a regular basis.

Summer in Texas 2005: First off I have to say that I was very happy to know that we were not going to be moving this summer. I'm not sure what I would have done if we would have moved for the thrid summer in a row. This summer has seemed to fly by, I can't believe that this is already the third week of school. I have been going in again for Atheltic Period (8th hour) every Monday, Tuesday, Thursday and Friday. We have two girls from the 8th hour study hall who watch Maddie and they are all still getting used to each other. It helps that that time is just about nap time, so she usually ends up sleeping for some of the period. I have been trying to adjust to the life of a stay at home mom, but am still not used to it. Some days seem to fly by while others seem to go on forever. We have been keeping ourselves busy with volleyball games and other events going on at school. Football season has started, but there are only 4 home games this year and Chad is so lucky to be on supervision duty for all of them. The first home game isn't until the 23rd of Sept. which just happens to be the week that I am home in Wisconsin. What else has summer brought us? Baseball. We have been to a few games and are still planning a few more. Last week we went to two, the Cubs and the Brewers. We are planning on going to Miller Park when we are home too, so Maddie will get to go to a real Brewers game. The summer also brought lots of visitors. We enjoyed each visit, but must say that it has been nice getting into a routine and being able to just be the three of us. I'm sure I won't be saying that come November, but then it will be Christmas soon. Basketball is just around the corner and we are already in the planning stage. Paul Keiper (the A.D.) is actually going to be the Varsity coach and I will be the JV coach. We might still get an assistant Varsity coach, or it might just be the two of us. Chad is also coaching basketball this year, the freshmen boys, so we will see how the winter goes with the suffling of Maddie around. We have already had lots of volunteers for babysitting, so I don't think that will be a problem. Summer doesn't seem like it is over for most people, but for us it has been over for a couple of weeks now. We are looking forward to next summer when we can make a trip home and escape some of this heat.

Maddie update: We like to be in a sitting position, but don't know how to on our own. When we try, we end up folded in half with our face near our feet. We babble all the time and love to talk to the ceiling fan. We have a bouncy saucer with all sorts of lights and toys and love to stand in that and turn ourselves around in it. We like to watch and listen to our Praise Baby DVD that has cool colors and good songs on it. We love going to school and having all the girls gush all over us. We like when they take us in the student section and hold us. We are getting used to mom and so sometimes give dad a rough time when it comes to naptime or bedtime. But most of all, we miss everyone and can't wait to see them in September. We also found out yesterday that we are going to have another boy cousin. Cousin Ben is going to be a big brother to a baby brother in January and we have another cousin coming in December whose big sister will be cousin Kate. We are looking forward to meeting cousin Kate, uncle Alan and aunt Tracie in September.

That is all the new news from here in Tomball. I will try to be more consistent and pictures I put up will not be the same as Chad's (or at least I'll try). Have a great day.