The girls and Chad had off for Martin Luther King Day. That weekend was packed with stuff, but it was all a lot of fun and so glad we got to do it all. Thursday started the Our Redeemer tournament, it is both a boys and girls tournament. We went Thursday, because we knew we wouldn't get to go any other time. So Thursday we packed everyone up in the bitter cold and headed to school to watch the OR girls take on the Mount Olive girls (that is my grade school), let's just say that OR pretty much blew them out.

Friday it was off to dad's game and so we had our usual fun Friday at Martin Luther for basketball. Saturday we packed everyone up in the car and headed to River Forest for the girls basketball game. It was alumni day and so I met one of my teammates/roommates and her family for the game. We went out to dinner after and had a really great time. Before the game we made a quick stop at uncle Alan's store to visit and Kate was there, so the girls had a great time for about a half hour in the store. So we headed home from River Forest in time to catch the second half of the Packers/Falcons game.

Sunday we went to church and then headed up to Germantown. There we dropped Lilly off for the day/night. We told the older two that we were going to run some errands and would be back. We started the drive to Lake Geneva, both girls at one point did fall asleep, so that helped. We were headed to the Timber Ridge Lodge and Waterpark. 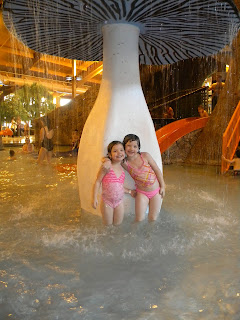 We had gotten a gift card from the baseball team last year and finally got a chance to use it. They also gave us a bunch of tokens to use in the arcade. The girls had no idea what was going on until I came out of the hotel with the room key. We had such a fun time playing in the water, winning tickets at the arcade, eating dinner in the restaurant, watching some movies, and just hanging out. 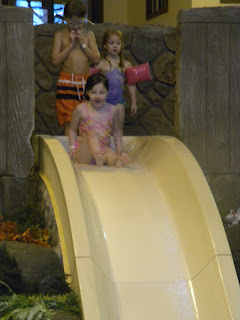 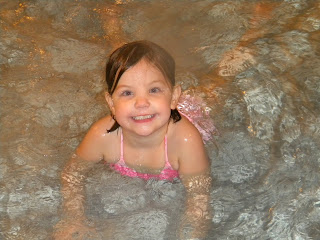 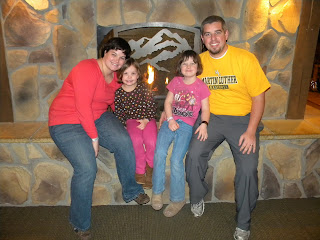 So Monday morning we were off to breakfast in Lake Geneva and then back to Germantown to get Lilly. Even though it was a really short trip it was really fun and so nice to have just a short break.

The girls have been busy with school, Chad with basketball, getting ready for baseball, and I am into full force golf outing mode for work. Maddie and I are just about to leave for some time at the YMCA. She gets to go to a 2 hour sports day while I get my workout in.

Maddie had the time of her life last night, when she got to spend the evening (not overnight) at Mia's house while the rest of us went to Chad's game. She was so excited and had such a great time. Those are the things that you just love and remember about how they get excited for such little things.

We have some fun ideas stirring for Valentine's Day, so keep a lookout for those.