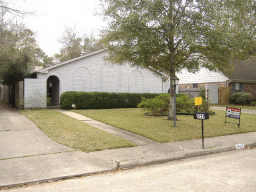 The Janetzke's new house. That's right, it is finally closed and we are the proud owners of a home. We aren't moving in until we get back from Wisconsin, but it works out great, because the people who lived there are still moving out. After all the runaround we had last week and trying to get the closing done before we left, it all worked out this week with us being here and the closing being there. We have some painting that needs to get done and just a few other things that we want to do before we move all our stuff in. Good thing Grandma and Grandpa Heff are coming the week we get back. We have moved a little bit south of school, but it still is only about a 15 minute drive and that is hitting the stoplights. Chad knows that I am happier where it is because it is closer to the nicer Wal-Mart. He is at home for meetings and has a short list of some things that he can get done while he is there for the next couple of days.

Wisconsin is great. The weekend was a whirlwind, but a good one overall. Maddie spent a lot of time in the car, but she doesn't mind too much. She is getting used to all the new faces. You have to give her about a half hour to get comfortable and then she will start putting on a show. The weather has been a little chilly, but it is suppose to warm up and I'm sure it will feel great compared to the 100 degree heat in Houston.

When we start taking some pics, I 'll be sure to post some. We didn't take any in Michigan, that was my fault, but we will start taking some here. Today cousin Ben and Sam are coming to play and tomorrow all five cousins get to play in Chicago. I'm sure they will all have a blast, well at least the three on the go.

Congrats on buying a home! How awesome. It will be great to have a place to decorate and paint as you wish. Way to go! (Can't wait till I can get to that point in life...just another year or so)

Thats awesome, give me a call when you get back if you need help painting...