Well all the boxes have been unpacked, the things put away, the apartment cleaned and emptied and so we are officially moved in. We have been staying in the house since last Thursday and have been unpacking and putting things together since then. Maddie is adjusting just fine. She loves all the room to play. I think she would have rather kept all the boxes out so she could climb on them. She has been great through this whole process. She has kept herself busy and for the most part out of the way. She did get to spend a couple of hours yesterday at the Odinga's while we finished up at the apartment. She got to play with Harley the dog and loved it. Chad was happy that the dish got installed yesterday in time for him to watch Clemens lose to the Tigers.

Now onto the next adventure. Baby #2. We are ready for the arrival. We are wondering when it may be. We do go to the doctor today for a check-up, but also for an ultrasound. Doc wants to check how big it is. When I was there last week he was a little amazed at how big it was. So we are thinking that it may be sooner than later. Maddie has no idea what is going on, but I think she will be surprised when it all happens.

We are all doing well and can't wait for visitors to come see our new house. We haven't been too good with the camera lately, so we will have to start posting some pictures soon.

A real quick update on the Janetzke's:

We are in the process of painting the inside of the house with grandma and grandpa Heff's help. It has been a lot of work, but are nearing the finish. We are then going to start moving our stuff in as soon as we can. We have until the 30th, but I think we will be out of our apartment before then. Maddie is doing great. She is a littl confused with all this going back and forth between the apartment and the house. She is enjoying all the space she has at the house. The other one is just 4 and 1/2 weeks away. I go back to the doctor this coming Wednesday and then it will be every week from then on. We are hoping to be almost all unboxed and moved in before the baby comes, but if not, I think that it will be okay. Sorry that I don't have too much other news, but this week has taken a toll on all of us and are just trying to get house stuff done. We will post more once we are moved in and ready to roll with the rest of the summer.

Well the year has come and gone and it seems like it was the fastest year yet. I can't imagine what the next year is going to be. Maddie had a very exciting birthday and I think is still recovering. The fun began on Saturday with our friends from Minnesota coming down and visiting. They came down in the early afternoon and we just got to hang out and play some cards with them. Sunday then came and it was a day full of lots of fun and people. We headed to church in the morning, got a short nap in and then it was off to the Brewers game. The Brewers hadn't been doing so well and so we thought having all of us there would help them a little bit, but it didn't. All of us siblings and families went to the game. Grandma and grandpa stayed home and got things ready for the party. 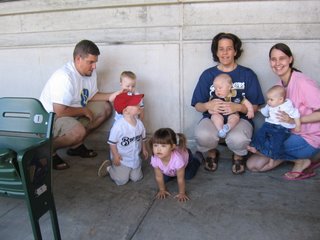 How do you get 5 kids two and a half and under to all look at the camera at the same time?
Answer: You don't. 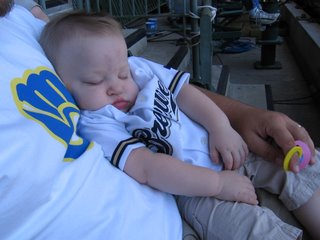 Can you blame her, the Brewers were on a 7 game losing streak. It was retro Sunday, so Mom and Dad sported the retro look, while Maddie sported her jersey. She and her cousin Sam got some jumbotron time. It helps when the tickets are right next to the cameramen and you have cute little kids with Brewers gear on.


After the game it was back to Grandma and Grandpas to wait for our guests. We got to play outside with our cousins and love to just chase them around. Maddie was having lots of fun with Ben and Kate. It is so funny to see the three of them interact with each other. I think that all the people didn't even phase her, since in the last three weeks we have seen so many new people each day and we have just gotten used to new people. 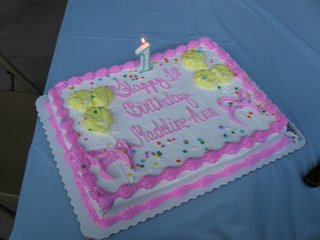 The cake before- it wasn't our mistake, but Sam's forgot the "E" in Anne. 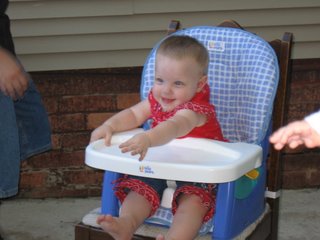 Here Maddie is waiting for her cake- as you can tell, she can't wait to get her hands on it. 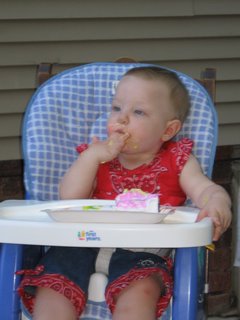 Just getting started- she took some time getting into the cake, but really loved the frosting. 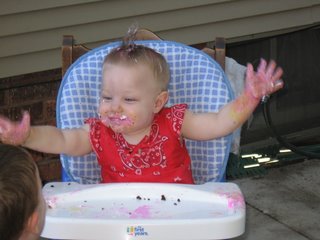 Here is the end- she ended with a pink mohawk that she managed to make herself. She has this habit of running her hands through her hair whenever she eats, so it was only a matter of time before the frosting ended up in her hair.


The evening ended with Maddie opening her presents and pretty much just crashing by the time she got to her bed. Overall I think she had a great time. She loved being the center of attention and loves being a ham in front of an audience.

Monday came and was her actual birthday. Amy, Joel, Ben, and Sam were still here since Joel has Mondays off this summer. We all headed to the Zoo in the later morning and spent a good chunk of the day there. Ben loves the zoo and loves to make all the animal noises. We had a great time and were all ready for naps by the time we left. 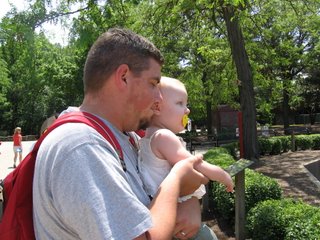 Here is Maddie and her dad checking out the elephants. Maddie also got a new stuffed elephant from the giftshop- who she has named "bob". 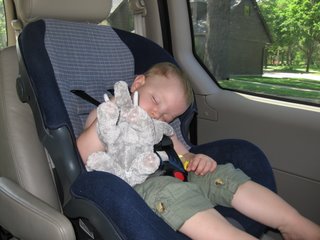 We didn't even make it out of the Zoo parking lot before we were sleeping. She had a pretty good grip on "bob" and wasn't letting go.


Overall we had a great couple of days. We are still recovering, but took Tuesday and Wednesday to get back into the groove of things. Tuesday we went up to Chad's parent's house and just hung out with everyone who was there. Today we did some laundry, ran some errands, and began the packing process. Chad was golfing today with my sister and his brother. It was nice not to have to be anywhere today. We just took the day in stride and are preparing to go back home and start the moving process. Hope you enjoyed the pictures, especially if you didn't get to be here in person. We will keep you updated on all the house stuff and of course all the baby news that will be to come.

Well we have been in Wisconsin for two weeks now and the time is just flying by. We have spent our fair share of time in the car, but Maddie usually takes a nap. We have been visiting people here and there and everywhere. We are looking forward to the people coming to us this weekend for Maddie's birthday party. I think it helps Maddie to be in one place for a longer period of time, it helps her to get back into that same routine she is used to. We came back from Chad's parent's house yesterday and will be at my parent's house until we leave. We have been having lots of fun and it is so cool to see Maddie remember all her aunts, uncles, cousins, and grandparents faces and get excited about seeing them. The past week has been a lot of just visiting with people. On Saturday we did attend a wedding in Wasau. It was a pretty typical WI wedding. We got to see Kurt and Lydia have their track and field day. It was more like a testing day for PE, they were trying to beat their own times in each event. We have gone on an adventure looking for missing ducks and frogs from the Janetzke Zoo. Josh has now become the mother to 8 little ducklings who have lost their mother. The first day he brought them home, he had to do some rearranging of the other animals he has and when we got back from lunch, two frogs and two ducks had escaped from their cages. Luckily they were all found and returned safely to their respectable homes. Last night we took a drive to Lake Geneva and went swimming with cousin Ben and Uncle Joel. Maddie is quite the waterlover. She also has no fear when it comes to things like that. She wants to let go so bad, but just isn't quiet sure what might happen after. We are going to the Brewers game tonight, graduation party tomorrow and we get to see our friends from Minnesota. Sunday is the party, Monday the Zoo, Tuesday to relax, Wednesday Chad is playing golf in the Martin Luther golf outing and Thursday is going home.
Even when we get home, it seems to not stop. Friday is doctor's appointment, Saturday is Grandma coming and then it is get moving on the house stuff. Well here are some pics from the trip already. We can't wait to share more. 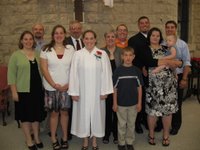 The Janetzke family at Lydia' confirmation 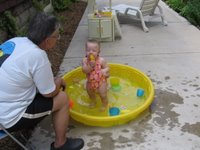 Maddie swimming in the driveway 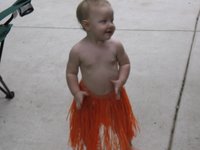 Maybe we should look into hula classes 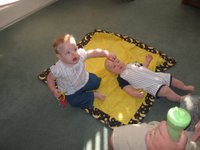 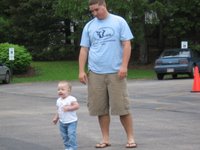 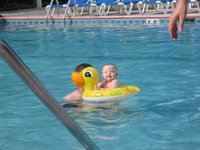 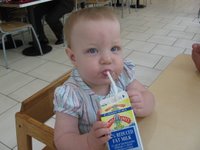 Look what I can do all by myself 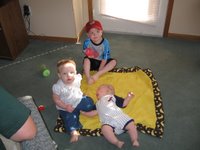