Okay, so I have been reading some of the Brewers' blogs from the mlb website and I am just in shock. All these people who claim to be true fans and have been fans since they were little, are already throwing in the towel for this year. It just frustrates me to no end. I am not saying that the Brewers are going to the World Series, but when was the last time that we were even in the wild card race at the beginning of August? I mean there is still a lot of baseball yet to play, but come on people, if you have been such die hard fans, now is the time to be proud of what they are doing on the field and the decisions they are making off the field. I am not even in Wisconsin, but I am sick of all these people who are saying that the season is over now that we traded Carlos Lee away. I would say that it was lucky we got Mench and Cordero, they sure helped us this weekend and getting some key wins against the Reds. I can only imagine what the talks are like in Wisconsin. I will always be a Brewers fan and it is especially hard to hang on to that, when you live in a city in your same division. Or should I say it is hard when that team is doing better than you, but for right now we are ahead of the Astros. This makes me realize why professional sports are a form of entertainment, the people aren't really into it, they just want to be entertained by the players.

Okay, so enough ranting... Things here in Texas are good. Hot, but isn't it hot everwhere? Chad actually has to start going into school on a regular basis again starting today, which is good, it gives me a chance to get the girls in order here and used to not having a second pair of hands. Maddie is learning to be patient and sometimes having to wait, because Emma is crying. Other than that, not too much new to report. My parents are coming in a little bit more than two weeks, they will be here for the first weekend of school- Chad always has the senior retreat, which means he is gone from Sunday afternoon until after school on Monday, so that will help me out lots. We are also going to be in Wisconsin in November for my cousin's wedding. It will be a short trip, but I'm sure well worth it.

I will try to get some more pictures of the girls up. I have been slacking on the job with that and promise to make up for it. I know that I need to be better about it, so making sure there are some updates on the blog help me to remember to take more pictures. 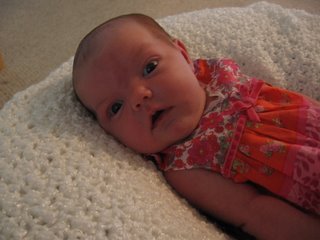 Earlier this morning I was thinking about how today is the 19th and today was the due date I was given for her. I really couldn't imagine if she would have decided to wait this long to join our family. I was uncomfortable enough by the time she did decide to come, I could only imagine what 10 more days would have been. That was my random thought for today.

Anyways, not too much to report here. Grandma Heff gets here tonight. I know that she is looking forward to her visit and we are looking forward to having her here. We have been pretty laid back here. It has been so hot out, well it hasn't been the heat, but the humidity (ha, ha). Chad is actually getting used to it a little bit more. He went out to mow the back this afternoon and didn't complain about how hot is was and even said that it was bearable.

After Grandma Heff leaves, Chad's parents, and three youngest siblings get here on Monday. We will have a few days with them and then have a little break from visitors. Uncle Ben is suppose to be coming the first week of August and it looks like the crazy boy cousins will be here along with their mom and dad and aunt Jana too the second weekend of August. I know that Maddie will enjoy having cousin Ben around to goof with.

On Monday, Pastor Patterson, came over and Emma was baptized. The Wilke family and Diane also were here as witnesses. Maddie was very interested in what was happening especially as the water was being poured on Emma's head. Emma's godparents are going to be Uncle Ben and Aunt Amy. 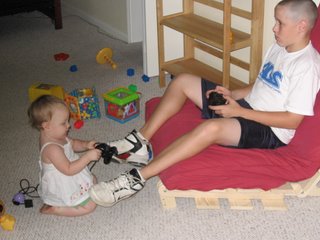 Today the same gang that was here on Monday is coming back for the White Sox/Tigers game.
I'm sure that Maddie will love having Christian here, she loves when he is around and pays all the attention to her. Here they are playing playstation together on Monday. She loves to put on a show for everyone. She now has started reading her books to you. She loves to babble while turning the pages, but always makes sure that you are paying attention to her reading.


Chad has bout 2 and 1/2 weeks of summer left. He has been getting himself somewhat ready, but at the same time, just spending some time with the girls.

Hope everyone is enjoying their summer, most of you northerners have a lot more of the summer left than those of us around these parts. 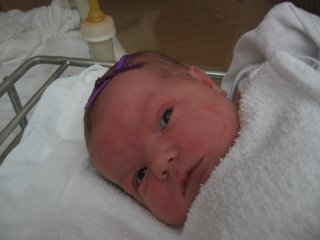 If you haven't read Chad's blog and are out of the loop. Baby number two decided to grace us with her presence on Sunday morning. Emma Grace arrived at 4:57am. Weighing in at 8lbs. 11oz and 21 1/2 inches long. She came quick and with a voice. We got to the hospital at 2:30am and she was here 2 1/2 hours later. She is doing great. Maddie has been a little confused on why mom hasn't been home, but she has managed to survive with dad, "uncle" Phill, "aunt" Shelley, and the Wilke boys. We got to come home today, I was ready to come home yesterday, but you know all that fun hospital stuff. We are all adjusting well. I am doing well and just looking forward to the rest of the summer.

We have visitors coming starting this weekend. Steph is stopping in Houston on her way to Salt Lake City, so we will have a visitor here this weekend. Grandma Heff is coming next Wednesday, Grandma and Grandpa Janetzke, aunt Kendra, aunt Lydia, and uncle Kurt are arriving on Monday the 24th. Then it looks like aunt Jana will get down here and also unlce Ben is looking to come too at the beginning of August.

Well we are all well here. Chad is celebrating his birthday today by bringing his girls home, and watching the All-Star game. Happy birthday to Kendra and Kurt later this week. Happy Anniversary to Kim and Odie and also Jay and Jill.

Maybe we should start a baby pool...

We have exactly two weeks until the baby is due, neither Chad, myself or the doctor thinks it will be that long. I went to the doctor this morning and he said we are ready to go, we just need some contractions to start. Last week when we went, we were told that our baby is a big one, most likely around 9 lbs. He is still thinking it is going to be big, but hopefully not too much bigger than 9 lbs. He is also hoping that we are going to have any problems with the shoulders getting stuck. He told me today that if we get through the weekend and want to schedule a c-section for next Thursday we could. He really doesn't think we are going to go that long, but you never know. We will just keep going on with our everyday business and see what happens. 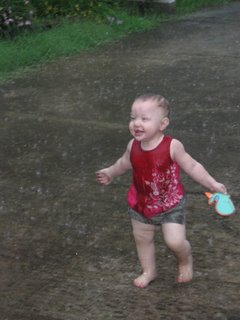 The last few days here have been nice and rainy and not so much fun to go outside. We got Maddie a blow-up pool, but haven't been able to use it because of the rain. She has gotten outside a little bit, but it pretty much rains on and off all day. She actually loves to play in the rain, so just about 10 minutes ago, we let her loose in the driveway and she got soaked. She thinks it is so funny to put her head under the water draining off the roof and also when the sprinklers are on, she loves to go through them. That is all from here. It looks like it will be a quiet day at home inside with all the rain that is coming down.

We spent the 4th with the Wilke clan. We grilled out and just hung out. It rained a little bit yesterday, but some of our neighbors, not anyone we have met decided to put on their own fireworks display across the street. It was quite annoying and there were fireworks in our driveway and yard this morning. Ahh, the joys of homeownership. Well hopefully you all enjoyed your fourth and we will let you know when this baby comes.