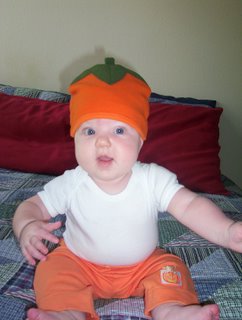 Well we did a little celebrating of Halloween here. Maddie got dressed like a pumpkin and went to school. All the office ladies and basketball girls just thought she was the cutest thing ever. So we survived our first Halloween. It has been raining most the evening here and so there weren't too many kids out on our way home from school.

The past week seems to have flown by. I think part of it is basketball. We have been practicing for two weeks. We had cuts (no one got cut), but we split the teams and so today we could start working on specific things. It is going good. The JV team has a good possibility of being good. It is just a matter of the girls all getting along that may be more of a problem. We play our first game next Tuesday. I am looking forward to the season, but I just wish we had a little bit more time before we had to play.

We headed to the football game on Friday night, it was a North. I am glad we didn't pay to get into the game because it was a blow out. We won 56-3. There was a point where you started feeling bad for them, but then you remember it is North and forget that feeling.

Saturday we had the Dinner Auction for the High School. We left Maddie with one of the senior girls and she seemed to do alright. Alright enough that Caitlyn said she would babysit again for us. On the way to the auction we called my dad because Chad and I were remembering where we were a year ago. We had thrown a surprise party for my parents 35th anniversary and we had also announced that we were pregnant. It seems like so long ago and Maddie is already getting so big. We also had to laugh about the Chicken Mole that Chad ordered at dinner that night.

Candidates Reach Voters With Blogs, RSS, Text Messages
New York City Mayor Michael Bloomberg's campaign is going mobile. The mayor's campaign Web site landed a spot on AOL's beta site AIM Today, where his smiling face appeared Monday morning next to the image of a ...
Find out how to buy and sell anything, like things related to how to repair a road bicycle on interest free credit and pay back whenever you want! Exchange FREE ads on any topic, like how to repair a road bicycle!