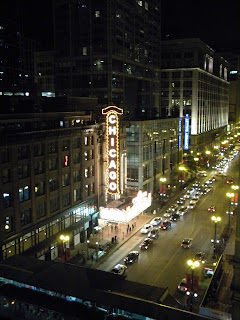 So last weekend Chad and I got away for the weekend to celebrate our 30th birthdays. Now Chad turned the big 3-0 on July 11th, but I still have about 10 days before my actual birthday. So we decided that we needed to get away for a weekend. We didn't want to go to far, but somewhere that we could go to hang out and have some things to do. So after dropping the girls off at grandma and grandpa J's (no they didn't keep all three all weekend- grandma and grandpa Heff picked Maddie and Lilly up after work), we were on our way about 10am. We made a stop at the outlet mall in Pleasant Prairie and then some lunch in Gurnee. We left the car in Oak Park with my brother, talked with Tracie for a little while and then took the El downtown. Our hotel was at State and Wacker, on the river. After checking we we walked on State Street and ended up in Millennium Park. We of course took the mandatory picture of the "bean" and then people watched. We just watched a group of 20something yuppies and wondered what it would be like to have that kind of life. 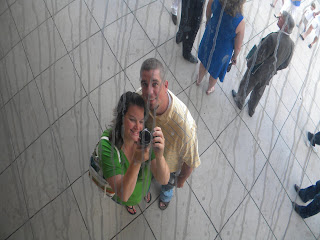 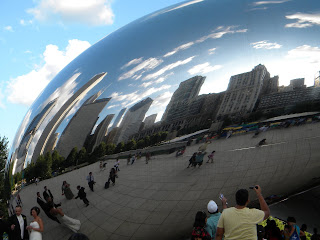 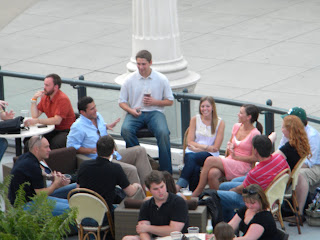 After deciding that we were going to go to a movie, we walked around the Tribune Building to look at all the pieces or rock or buildings from around the world. I never even knew they were there until I watched an episode of CSI:NY this past year. It was pretty cool to see them all. There is a rock of some sort from all 50 states, many monuments that are known around the world, and then some that are pretty unique- like the fact that they had a piece from the place Luther lived in Wartburg. 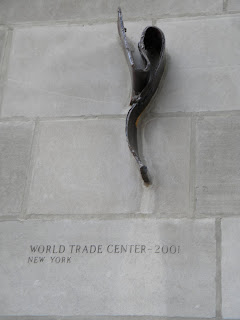 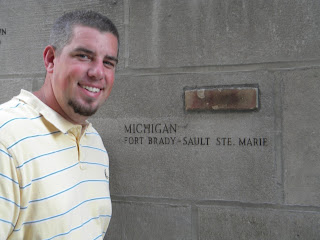 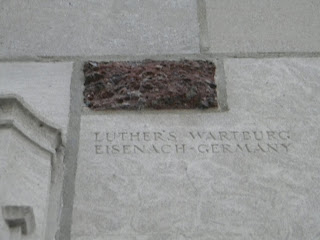 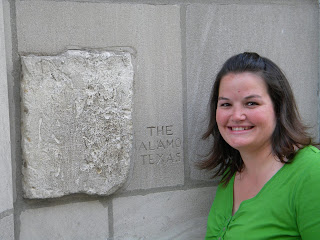 We headed to the movie theater- saw The Proposal. Funny movie- didn't think it was going to be that funny, but it was. We stopped at the Jewel for some snacks and drinks and then it was back to the hotel to people watch out the windows. Some weird people come out after dark in Chicago. We had a corner room, so looking north on State Street you could see the river and the Wrigley Building and then looking south you had a perfect view of the Chicago Theater(picture at the top of the post).

Saturday we slept in, took our time getting ready and then we thought we would try something a little cultural. Chad had found this photography museum, well it was cool, but not very big so it only took us about 30 minutes to go through the whole museum. We headed over to the Sears tower, but the line was way to long. So instead had some Chicago deep dish pizza for lunch and Garrett's popcorn for dessert. The line at Garrett's was a little long, but we met a really nice lady who is a CTA bus driver. All day we saw people who were doing the Great Urban Race- we looked at the website, it looks really cool if anyone is interested. We did a little shopping on Michigan Ave (had to get the girls something from American Girl for their Bitty Babies). Went back to the hotel for a nap- that doesn't usually happen unless you are napping with a kid, met up with Renee and Karl for dinner at California Pizza Kitchen- good food and good company. Then it was to Mother Hubbard's (a sports bar) to meet up with Amy and Joel for a couple of beers and to watch the Brewers game.

Sunday morning we got ready, checked out of the hotel, and then it was back to Oak Park to hang out with Kate, Ella, and Tracie. The girls were just a hoot and we were on our way by about 2:30 to head to Germantown to pick Emma up. Our girls had a great weekend with their respective grandparents. Emma talked grandpa J's ear off on their walk to Walgreen's, Maddie got to go to the Blueberry festival and a movie. Lilly just went with the flow. It was fun to be away for a couple of days, but it was also nice to be home with my girls.